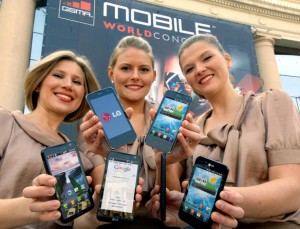 YouTube and LG Electronics have partnered (is it just me or is this week riddles with mergers and potent partnerships) to give us the LG Optimus 3D. And as the name suggests, YES; it has got the much-coveted 3-D technology. It was launched at the ongoing Mobile World Congress running from 14th to 17th February in Barcelona.

This will make it easier for users to take 3D pictures and videos on this phone and upload them to the internet with relative ease. It does this with the help of a system mounted dual-camera for taking the right and left images as is normally the case with 3D cameras.

The LG Optimus is loaded with a 1GHz OMAP4 (Open Multimedia Application Platform Version 4) dual-core processor from Texas Instruments, a dual-channel memory to ensure users have enough power to work on 3D video on the handset. Users get the chance to share 3D videos and pictures via wireless and wired connectors, all and including High Definition Multimedia Interface.

It is also Digital Living Network Alliance networking certified which means that it uses standards-based technology to make it easier for consumers to use, share and enjoy their digital photos, music and videos.

The Optimus 3D runs on Android OS 2.2 (or froyo/a name concatenated from Frozen Yogurt), an operating system that is growing both in robustness and popularity  since its acquisitions and full ownership by Google Inc, and 4.3-inch full touch-screen that lets users view 3D images and video without using the custom 3D glasses.

In a joint statement by the two companies, the confirmed that, “The new partnership is part of a broader push into 3D entertainment by LG and the world’s largest online video community.” “YouTube and LG collaborated to enable the delivery and sharing of 3D video onto mobile devices in a way that makes it simple and easy for consumers.”