Microsoft, Nokia : Did you miss the wedding?? 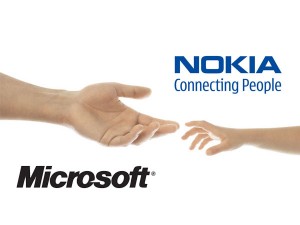 On the 10th of February, NOKIA CEO Stephen Elop hinted that he had a great announcement he had for us the following day.

Some knew what it was all about while others could only speculate. A number of techies believed that Meego was being kicked to the curb or that Nokia was joining up with another company to produce their own tablet.

Well, everyone was right… at least partly.

Stephen Elop from Nokia and Microsoft Corporation CEO Steve Ballmer today announced that they had agreed upon entering into a strategic partnership affecting the two big companies in a video released on Nokia’s Youtube channel yesterday evening. This comes amid rumors that Nokia were developing a way to combat the Apple iPad that has really rocked the market in the last two quarters. This could be their chance to do just that.

The announcement comes just as the Nokia is about to launch the much anticipated E7 with a full touch screen and a full QWERTY keyboard underneath that. The intro video for that piece by Industrial designer Shunjiro Eguchi is very exciting. Watch it here.

Despite the hullabaloo, many are wondering what the partnership means for the future of Nokia devices.

First on the list is what happens to Ovi Store on Nokia. Rumor has it that they are quitting Symbian altogether. Now the real question is whether their store will work on Windows Mobile Version 7 which they say will run on the high-end Nokia device range. Or is this the death of Ovi altogether??

Gamers are annoyed that Angry Birds may not be as exciting on Windows Mobile.

Other critics have come out to say that this is a good move for Microsoft because they finally have the physical architecture on good devices to load their Operating System. Guesses are that Nokia will handle the hardware and Microsoft will handle the software. And that the software bit will be handled by Microsoft in its entirety very soon phasing out every bit of Symbian Operating system existing on Nokia handsets.

A warning to Nokia though, Microsoft have been known to play hard ball (very hard ball in fact) and this could end up straining their relationship with Samsung, HTC and iMate all of who run their devices on Windows Mobile.

Experts in the market expect stock figures to experience massive altercations at the hands of the ‘merger’.

Google and their Android products had better look out too. Twitter users worldwide have the feeling that #NokMsft is the next biggest thing.