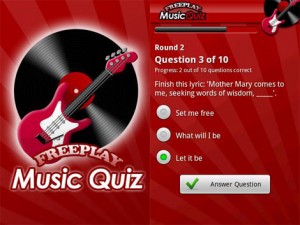 We have all heard those people who claim to know music. We even have friends who declare that they know everything there is to know about music. But how well do they really  know? Can they tell you what song certain lyrics are from? Or the year an album was released or the first single?

If you think you know your music, then you need to get the FreePlay Music Quiz App from the Ovi Store on your Nokia phone. It challenges you in ways you never thought possible and is the best way to test your knowledge of different music genres, from rap to pop, techno and many others. It features questions that range from the year certain albums were released to what movies some songs featured in and so much more.

1. Round by round – Here the player is asked a series of ten questions per level and as you qualify to move to higher levels, the questions get harder and harder.

2. Continuous – where there are no levels for you to qualify just a wide range of questions. This mode is quite tricky as you cannot predict when a hard or easy question is going to come up and you have to rely on your gut when answering the questions. For every question, you get right, you are applauded and if you get it wrong, you are booed.

Some of the questions you can expect include:

‘Gotham City‘ is a song by R&B singer R. Kelly based on a fictional city of the same name.

Question: In what year was this single released?

Question: From what Spice Girls song are these lyrics from?

And much much more……

This is a fantastic app to use because you get to brush up on your knowledge of your music and enjoy yourself at the same time. Next time your friends say they know their music, challenge them to download this app and find out for sure how well they know their music! And as they come to the realization that they don’t know as much as they thought they know, you can kick back, relax and even brag about your new found knowledge!