Imagine yourself to victory with Microsoft.

Have you got an edge for technology in the line of inventing software? Designing systems that help the community or help grow the economy of areas deeply in need of it. Then this is for you.

First thought-of in the earlier part of 2003 in India with an active participation of about 1000 students, Microsoft launched a competition that would later bring a revolution the world.

Imagine Cup is a Microsoft competition that focuses on 4 main aspects in this region namely;

4.       Game Design (running on the Xbox, Windows Mobile and its Web counterpart)

Microsoft enables students to come up with ideas that will benefit the community and themselves as well. Microsoft provides a platform for the students to actualize their ideas and build them from concept stage into an actual ‘tangible’ format in the sense that it becomes something they can actually see working. They do this by involving the students on a personal level in the most influential stages in their lives. When they are easily malleable in their thinking processes.

Microsoft does this by providing a place to come up with ideas and convert them into money which is the main aim of many business processes. All one needs to do is be part of a learning institution (be a student), be between the ages of 17 and 26years and submit a project.

By logging onto www.imaginecup.com , one gets to register with the Microsoft Team and active participation begins. A student gets access to developer tools on both the client architecture and the server architecture. “Students get a chance to gain access to premium software, ensure a global connection and create apps that tackle world issues all from a social point of view.” Says Vincent Mugambi , Microsoft’s Developer’s Platform Evangelist.

“We give students a host of software that would otherwise be inaccessible like latest builds of C# Express Edition as well as the C++ Express Edition with the aim of giving the students a feel of the best tools in the market to create products that they will always be proud of.” Vincent continued.

From a measly 1000 participants less than 10 years ago in 2003, the Imagine Cup had a total of 325,000 participants in 2010. The finals were held in Warsaw, Poland and first place went to Team Skeek from Thailand who came up with a product called eyeFeel. The team’s project, eyeFeel, aims to help the hearing impaired communicate in the classroom. The software uses a number of technologies, including speech and facial recognition systems and a text-to-sign language translator, to facilitate real-time conversations with someone who is deaf. The team said its goal was to encourage more people with hearing difficulties to enter regular schools and universities. Top projects in the past few years have come from China, India, the US and Brazil. 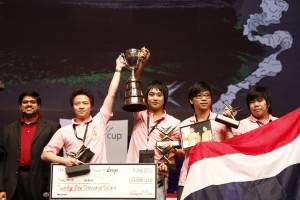 “We have a dream that all students will be equal in the classroom,” said team member Pichai Sodsai. “That’s why we built eyeFeel.” They took home 25,000USD.

Away from the international version of the competition, Microsoft’s regional office promises a more localized competition where countries in Eastern and Southern Africa will have a smaller regional competition and award for that as well. Microsoft plans to have a launch similar to the Kenyan one and subsequent finals in Kenya on April 4th, Ethiopia on April 13th, Uganda on April 7th-8th, Namibia on April 20thand Zimbabwe on April 27th.

Dr. Joseph Saville, an ICT lecturer at the Strathmore University, reckons that Apps built should be more localized to better address issues faced in the African continent. He says main challenges include the ability to foster innovation and practical skills among young minds to encourage them to engage more in creating applications. He stressed on the need to join up in institutions such as the iLab Africa center situated at Strathmore University and participate immensely on creating components that will grow IT policies for government and more state institutions.

Issues that Microsoft would like to see addressed by the innovations emerging from this year’s Imagine Cup are those that involve climate change, hunger in 3rd world countries, dealing with famine, reduction of child mortality rates, achieve primary education goals and a list of other goals highlighted on the United Nations Millennium Goals website. The First lady of the United States couldn’t stress this more in an address to panelists and finalists alike in her video address to the attendants at last year’s event.