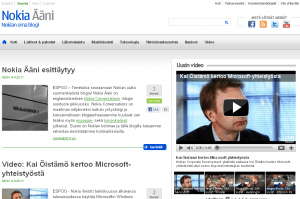 According to the Nokia conversations website “Finns are the fourth largest nationality among Conversations readers. Given that there’s only 5.3 million people in the country, that makes it the highest readership-per-capita in the world by a long way. Nokia’s Finnish heritage and key place in the country’s economy made it a natural choice for our next language edition.”

This translation makes a lot of sense now that the Finns are the same blokes who actually engineer the Nokia range of mobile phones.

Heidi Lemmetyinen, the website editor for Nokia conversations, says “We’re really delighted to be launching a Finnish version of Nokia Conversations. It helps us reaffirm Nokia’s commitment to and identity with the country, and report on locally relevant events and affairs to a far greater extent than the English-language site. We also think it’s really important that Finns get to talk with one of their leading companies in their own language.”

“Ääni” means ‘sound’, ‘voice’ or ‘vote’ – something most of the Finns actually do not know and this was chosen as a good name because the voice of the users, debators and contributors to Nokia forums is what really matters.