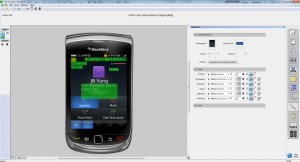 Research In Motion (RIM) will soon be launching the gold release of the BlackBerry Theme Studio 6, a free and powerful device personalization suite of tools that includes the Theme Builder for creating themes, and the BlackBerry Composer for creating animations and graphics to use in themes.

This new release of Theme Studio makes it even easier for users and professional designers to customize virtually everything, including backgrounds, sound effects and ringtones, icons and menus, and fonts. You can even add animations and screen transitions.

This comes amid a more recent revelation that Blackberry developers would be able to download the SDK’s for completing the APIs related to the device enabling many developers to become ambitious and creative on the programming front.

Among the exciting new features are that are in Theme Studio 6 are;

1. A new user interface for Theme Builder that lets you click on any item on the preview and directly edit its settings.

2. The Background Wizard that makes it easy to add dynamic wallpapers to your theme.

3. New productivity features that allow you to batch update all of the graphics in a theme automatically and also change fonts across multiple phone screens automatically.

4. A new export option that makes it simple for professional designers to offer themes through BlackBerry App World.

BlackBerry Theme Studio does continue to be compatible with popular graphic design tools such as Adobe Photoshop and Corel Paint Shop Pro which are widely used as the most common frontend design applications.