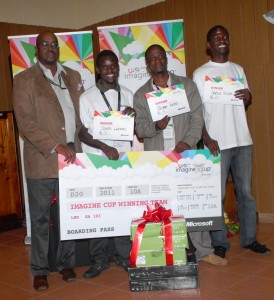 The regional finals for the Microsoft Imagine Cup competition, a competition aimed at getting students to bring out their best in terms of innovation and creativity as far as software design is concerned, were held yesterday, 9th May, at Strathmore University. The team that clinched the top spot is Team QuestO from Uganda’s Makerere University.

Most teams comprised of students who are in university with many giving good presentations but the winning presentation was made by team QuestO who showcased a desktop, mobile and web based system, dubbed CRIMEX that focuses on crime pattern analysis in developing countries.

Joseph Lutalo, a finalist at the College of Science and Joshua Kaizzi, a first year student in 3D animations at the college of Computing and Informatics,  under the mentorship of Joseph Kaizzi who is a past participant in two Imagine Cup worldwide finals,will now go on to compete in this year’s Worldwide Finals, which will take place in New York City, USA in July 2011.

“We were speechless. To have won this competition, and to have the opportunity to represent our country at Worldwide Imagine Cup alongside some of the brightest young minds, is an honour,” said Jospeh Lutalo of team QuestO “And we’re thrilled to have the opportunity to compete with students from around the globe who, like us, are passionate about making a difference in the world.”

This comes barely days after the Imagine Cup finals were held in Iraq with emerging winner, Team Hawk bedazzled the panel of judges by creating a system that can be used to register refugees and monitoring their welfare needs such as monitoring healthcare and education. This also includes facilitation of distribution of aid to the said refugees. The solution provides a mobile means for staff and users with minimal training to enter data relevant data to the welfare and educational needs of the refugees.

This year’s theme was inspired by the students’ want to eradicate or help reduce the woes that are faced all over the World and are registered as deterrents of growth in developing nations. Such troubles of the developing nations are listed on the United Nations Millennium Goals website.

This year’s winning team ‘Team QuestO’ looks forward to participating in this year’s event as they stand a chance to win the worldwide championships like last year’s winner who took home 25000USD to bring their innovation to the market.

Microsoft has held the Imagine Cup competition for 9 years now (2011 being the ninth year) and they are fully committed towards seeing the UN Millennium goal to “Imagine a world where technology helps solve the toughest problems,” achieved in excellence.