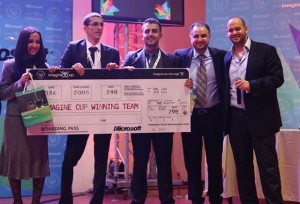 At the beginning of the year, we highlighted a story in which Microsoft had launched their campaign for a competition dubbed the Microsoft Imagine Cup.

The annual event has participants from all over the world with all teams aiming to garner a chance to represent their country in the worldwide championship finals and ultimately take home the prize money. Last year’s prize was a whooping 25,000USD.

This year, Iraq is already way ahead of their game. The winning team, Team Hawk from the American University of Iraq-Sulaimani, bedazzled the panel of judges by creating a system that can be used to register refugees and monitoring their welfare needs such as monitoring healthcare and education. This also includes facilitation of distribution of aid to the said refugees. The solution provides a mobile means for staff and users with minimal training to enter data relevant data to the welfare and educational needs of the refugees. The data is collected through the same mobile phone system or via any computing device use of mobile phones. Somebody say TABLET. WOOHOO!

Second place went to Wireless Minds, yet another team from the American university of Iraq-Sulaimani with ABC 3D, a picture dictionary for children aged 6 to 10 and it allows instructors to facilitate language learning starting with English so as to address challenges facing primary school education.

Third place went to Regal Team from University of Dohuk created an application that reduces child mortality whilst improving the health of mothers.

Hopefully Kenyan teams will consider this as a challenge and come up with their applications as quick as possible.

See you at Strathmore.