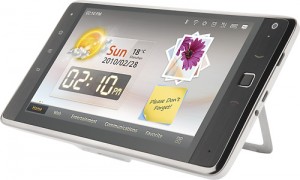 The Huawei IDEOS™ S7 Slim made first appearance at the Mobile World Congress in Barcelona in February, and as its name suggests is a slimmer and fitter version of the original Huawei IDEOS™ S7.

“Huawei IDEOS™ S7 Slim is a next-generation 7-inch capacitive touch-screen tablet offering a blend of style and portability, with 12.5 thickness supporting both 3G and WiFi,  and is super light for a tablet at 450g,” said Herman He, CEO Huawei Kenya. “Our goal is for more Kenyan’s to continue enjoying better android experience on affordable high-end devices”, He added.

Huawei is aiming to globally ship up to 20 million smartphones this year, an increase on earlier sales targets of 12-15 million units in 2011, and introduces 8-10 new smartphone models, with 80% being of entry- to mid-levels. This supports the  2011 Communications Commission of Kenya (CCK) report that  indicates that between July and September 2010, 98% of the Kenya users access the Internet using a mobile device.

The Huawei IDEOS™ S7 Slim is now available in Safaricom shops, at a retail price of Kshs. 39, 999.