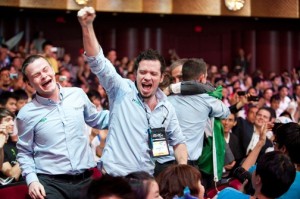 The Imagine Cup 2011 competition winners were announced tonight at the Imagine Cup World Festival and Awards Ceremony at the David H. Koch Theater at Lincoln Center in New York. The event was the culmination of a six-day celebration of technology, hard work and ingenuity. Narrowed from more than 350,000 global registrants, more than 400 students from 70 countries traveled to New York to compete at the Worldwide Finals. The festivities included remarks from philanthropist, activist and actor Eva Longoria, CEO of the Startup America Partnership Scott Case, and New York City Mayor Michael Bloomberg.

“The innovators, entrepreneurs and humanitarians who compete in the Imagine Cup have developed an inspiring spectrum of projects, raising the bar higher and higher each year,” said S. Somasegar, senior vice president, Developer Division, Microsoft. “We are in awe of the students’ solutions for addressing social and real-world challenges, and want to help them take their projects to the next level with the financial, technical and business support they need to change the world.”

Imagine Cup teams will be eligible to apply for grants that include a combination of cash, software, training, consulting and other support. Microsoft will announce details about the grant program and application process later this summer.

In the Software Design competition, Irish Team Hermes took home top honors. The team designed a device that plugs into a car and monitors dangerous driving behavior and road conditions, providing instant feedback to both the driver and the car owner. The team’s solution uses embedded technology, Windows Phone 7, Bing Maps and the Windows Azure cloud computing platform to change driving habits and reduce road deaths, which impact a significant number of young lives each year. With its victory, the team won $25,000 (U.S.).

James McNamara, one of the team members said, “We have a problem in Ireland; that problem is deaths on our roads,” said Team Hermes member James McNamara. “Thanks to Microsoft and the Imagine Cup, we’ve been able to come together to solve this problem and save lives.”

Student projects are frequently inspired by United Nations Millennium Development Goals, and participants seek to solve the world’s toughest problems through technology. As such, this year teams focused heavily on environmental concerns, with 24 percent of worldwide finalist projects and 60 percent of all Game Design projects shedding light on environmental issues. Taking a cue from recent world events, natural disaster relief was another common theme: 23 percent of projects addressed varying aspects of disaster relief.

Inspired by improvements in mobile technology and accessibility features such as speech recognition, more teams than ever (22 percent) developed projects that would enhance the lives of people with disabilities.

From a technology perspective, Windows Phone 7 was the most commonly used technology, with 48 percent of teams incorporating this mobile technology into their world-changing projects, from finding the nearest recycling center to helping those in a disaster broadcast their locations. Windows Azure was also popular, with 32 percent of projects relying on the cloud-based platform to aggregate crowd-sourced data and to integrate satellite data, among other uses. 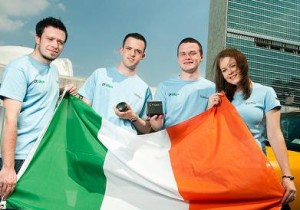 The following is a list of the top three winners in each of the five competition categories:

Game Design – Students select one of three tracks (Mobile, Web or Windows/Xbox) to create games that are not only fun but also help to improve the global community at the same time: 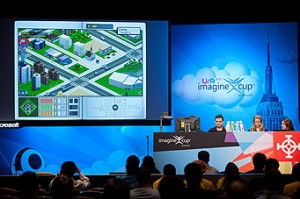 In addition to the competition categories above, Imagine Cup includes four challenges. These four challenges provided more opportunities for students to win their share of the total $215,000 (U.S.) cash, as well as other prizes. The following is a list of these winners:

Interoperability Challenge. Students are challenged to pair free and open source software with technology from Microsoft and other companies to create groundbreaking applications.

IT Challenge. Students are tested on their knowledge of IT systems and faced with unique scenarios and diverse needs to solve, competing for the title of best of the best in the industry.

Windows 7 Touch Challenge. Students are tasked to develop solutions that use Windows Touch technology while expanding the possibilities of how a user can interact with a computer.