Going Digital – Why you ought to make the Switch. 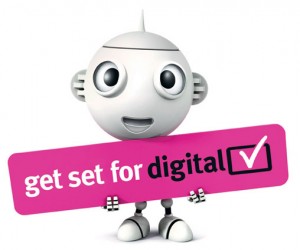 And everything that is not going digital, is well…. Going to Fail.

Be it the microwave we constantly use to re-heat food in the kitchen to the razors we employ so diligently to our rather rugged appearances (both male and female bodies).

There could well be various outstanding reasons for this shift into the digital age, but the nearest and least far-fetched would have to be that digital is easy. Think of the Jaguar. Not the animal, the automobile. The interior as many would have guessed is very fine-cut. Kenyan automobile enthusiasts recently had a chance to feel up on this beauty at the recently concluded Total Motorshow held in Nairobi. The interior which would generally be our focus was jaw-dropping.

The dashboard was exhilarating in the least. Don’t get me wrong, I am a sucker for décor but then again it is the car’s bust that truly caught my eye.To cut a long story imaginably short, she’s beautiful and modern. Even the guys down at Jaguar recognize that digital is the way to go.

A bit closer home, the Kenyan Government recently announced that all broadcast signals are to be switched to digital by mid 2012. Many found this to be a good gesture towards moving the country forward in terms of Digital actualization and adoption to fit in the Millennium Goals (or something remotely similar like Vision 2030).

SES, a satellite company that deals with satellites recently made entry into the country with the idea of enhancing digital TV offering. The reason I say ‘enhancing’ is that there is already digital TV in the country (and region) but these guys say they’re going to make it better.

SES is a French company that has played with Satellites for a pretty long time. They have a footprint in Africa and the world map as well as an affiliate (or Mother called WorldSkies). Their work on Digital TV seems to be quite extensive with good research earning them a place in Digital TV distribution as explained by one of their top guys in the country recently at a cocktail.

Sooner or later, we’re all going to move to Digital TV and those set-top boxes will be ever so popular.

Well, either that or Satellite dishes, decoders and pay-tv boxes in every home to facilitate paid-for transmission.

The problem, SES reckons, is the quality of service which we are granted. Broadcasters try to fit too many channels in the same bandwidth compromising on quality of signal that can be actualized by the transponder on your satellite dish.

These guys say the normal, and recommended, size for a satellite dish in Kenya and possibly the region is 90cm (diameter). What the current installers (Zuku and DSTv) are doing is basically ripping us off.

SES is going to be in the market soon and seem well worth their salt.

Look out for them.