‘Super WiFi’ as Cognitive Radio System – by Microsoft and Adaptrum. 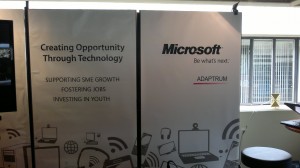 Adaptrum, a Silicon Valley located start-up company that develops wireless technologies is in tandem with Microsoft to utilize white-spaces that are currently un-used within the space spectrum.

The concept dubbed ‘Super-WiFi’ will take advantage of previously untapped resource that is free bandwidth located in regular TV channel signal allocation. Say for instance the bandwidth allows for 25 channels and only 20 are being used, Super-WiFi will ride on the existing 5 unused channels to transmit broadband to potentially millions of homes around the world.

There is a catch though. You may need to have cable.

The concept of the technology is that it will run seamlessly as long as you have a TV connection in your home. This is by all means a pretty cool idea, right?

This idea is still in the testing phase though and is expected to be in the US market in early 2012. For emerging markets like EastAfrica, we should expect it a year later, probably early to mid of 2013.

Focus in the very near past has been to use previously un-used technologies and max out their potential. In this case, we are using “white spaces”. The term refers to the collective un-used bandwidth in a medium such as radio waves, TV frequencies and other dependable mapped out on a bandplan by a regulatory authority.

Whitespace planning was approved in the US quite a while back and Microsoft has been key in progressing research in this area as far back as 2008 in the Cognitive Wireless Networking Summit in June of the same year.

Spectrum expert and Adaptrum point-man in the project Tang Haiyun says the issue of interference with normal programming waves for traditional media will not arise. He reiterated that while adding that,” “The new technology shall be available for widespread use in 2012… Its propagation is 3-5 times better than the normal wi-fi,” 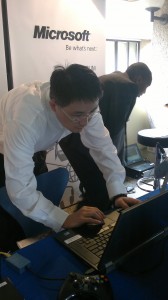 This initiative has been announced at a perfect time for Africa mainly because our governments and technology instruction and road-map bodies have started preparing to make the switch from Analog to Digital signal.

This means that most homes in emerging markets will have access to basic cable and broadband routed straight to their homes, comforting right?

Another big-up for this venture: bandwidth is expected to be as good as 15-20mbps download and upload. This is a huge wow especially now that most resources can (and necessarily) should be found online.

The joint venture was showcased by Microsoft’s Paul Mitchell at the recently held IGF conference on 27th September this year. Lavinniah Muthoni was also there representing Microsoft.