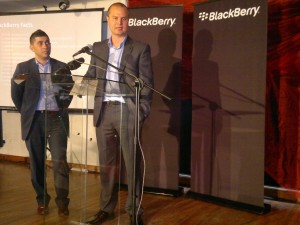 BlackBerry OS 7 recently launched in Kenya amid wars to transform BlackBerry to be the most popular mobile phone operating system in the market.

In the event held last Friday at the Alliance Francaise, Waldi Wepener, Regional Director for the African Region at RIM, confirmed that he is really excited about the introduction of this Operating System and its devices in this part of the world, specifically an emerging market.

In an interview with Juuchini Media, Mr. Wepener said that he believes BlackBerry OS 7 will be hugely popular because it is a robust OS.

He added that they had (and still have) plans to set up shop in the region and they plan to have the local office in Kenya. They have come into this market with this new range of devices at a time when most mobile phone manufacturers are struggling to get their devices popularized in this market. Nokia-Siemens recently announced plans to cut 17,000 jobs from their payroll which makes one wonder what BlackBerry and RIM in general have up their sleeve to beat the upcoming economic crunch now that they plan to have one more office. 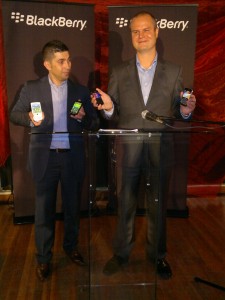 BlackBerry has taken advantage of a few new features to wow their customers with the most compelling being the liquid graphics which offers an unmatched web surfing experience, augmented reality which takes advantage of shared location services to geo tag photos uploaded by users on social networks, NFC (Near Field Communication) which enables users to share pictures, music, videos, contacts and all manner of files by a simple tap all made possible by a new chip inserted into the device’s hardware.

All in all, RIM has not been doing too well in the smartphone market recently and these devices are definitely going to change that. A few of them like the Bold 9900 can be found in Safaricom shops in Nairobi, Kenya while the rest are expected between early December and within the first quarter of 2012.

When asked about BBX in an exclusive interview with Juuchini, Waldi reiterated that it was made possible by a recent acquisition of a company called QNX and they plan to go forward with it because it is very robust. “There will soon be a series of BlackBerry devices that will offer the world’s first QNX experience. We although plan to run the BBX platform outside the BB OS 7 platform in future.”