GroupOn Deals – Why They May Not Work For Your Business 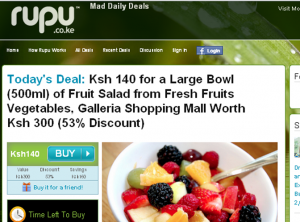 Groupon – (noun) Service that allows customers to buy items and services for a significantly lower price as a marketing scheme meant to aid the advertising business grow.

Groupon services started in the US last year (2010) with a company called Groupon and thus gave the great venture an apt name. They were an instant hit and even had Google offer to buy them out for 6 Million USD which they rejected. Oh wait, not 6 million; it was actually 6 billion. Sorry for the oversight. From this one actually has the clear impression that Groupon (and subsequent group buying ideas) are a hit in markets wherever they land. They use simple formulae that measure what’s hot in the market and offer it at a reduced price with barter to the service offering company that their ‘brand will be widely known’.

Unfortunately, many companies are falling into this trap where they think that simply putting up a deal on a Groupon site will do the magic. This couldn’t be further from the truth. Sure, your offer will be bought into, and sure consumers will speak of your product for 3-4 days as your ‘offer’ is hot but does it maintain top of mind awareness?

Groupon services came into the Kenyan market in late 2010. Specifically December and they have been doing well so far.

With good connections and an advertising budget they have amassed quite a good number of clicks and some of their deals are always being bought out. By ‘bought out’ I mean the maximum number of deals purchasable is reached and the deal is closed. With a wide service listing on Cakes, massages, treatments at the spa, car garage service for brand vehicles and even laser surgery, they have a lot covered.

Brilliant. So these guys discovered a way to get you to upload your offers onto their website, give it to them for less than half price and they get money off your deal. Doesn’t exactly seem all that bad since the consumers are happy with their M-Pesa payments and they get their stuff (albeit with a few delays sometimes).

What about the dealers? Truth is they almost always get a raw deal. Top of mind awareness doesn’t occur or happen overnight. What these businesses need is a strategy and a digital one at that. I am sorry but thinking a few good deals will get your business on the map is a spit short of hogwash. Makes no sense. If you want an advertising schedule, be prepared to do a proper campaign for it. A shortcut in the name of a mention just won’t cut it.

Social media companies like Deviate Kenya by @NonieMG (email is hello@deviate.co.ke) will do you a good job. Get a consultation and let the experts do their magic. You will not remain at the top of people’s mind if you do a hit and run. I know the general idea is not to attract a whole crowd of hungry consumers who you will probably be inadequate for anyways but at least try. Try and get a good deal and your money’s worth.

Rupu will place your ad on their site for 3-4 days maximum and if no-one is interested, no-one will buy.  They probably will not admit it but some of their deals have gone un-dealt. J

There’s also Zetu Deals, a Groupon as well. I reckon they have been in the group buying scene for a while as well but I could be wrong.

A story is told of Rachel Brown who runs a cup cake business and has been baking for 25 years. She thought it wise to get a little extra trade buy offering a group buy for her cakes charging 6.50 Pounds instead of the usual 26 pounds for a box of cakes. That day she got orders for 102,000 cakes and made a loss of 2.50 Pounds off each box. She had to hire an extra 25 staff and still cut the orders off at 8,500. Her business was usually making 100 cakes a year so it is easy to see where the strain came from.

Bottom line: Really want to be known, consult a digital media strategist, and/or a company that deals in digital media and concerning consultation. Do NOT go into a group buying deal and expect to be the sudden talk of the town.