Microsoft’s ‘Badiliko’: What it’s all about. 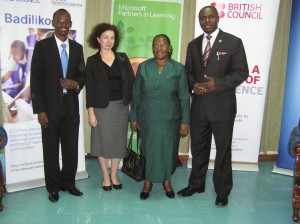 What is Microsoft’s Badiliko initiative all about?

It is an initiative aimed at improving access by installing 80 digital hubs across sub-Saharan countries both in East Africa and West Africa. The countries that are going to benefit from this Badiliko campaign are Tanzania, Kenya, Ethiopia, Uganda, Nigeria and Gabon.

Microsoft has been very instrumental in acquiring partners that they later help launch Learning Initiatives in the Partners In Learning Programme.
The service will make use of native Microsoft legacy systems like Microsoft Multipoint server and other Microsoft Based distribution systems to grow popularity of Badiliko. The main aim of Badiliko is professional development of Trainers (Teachers) and the students and by extension the community.

To push adoption and show maximum support for Badiliko, Mrs. Maundu, Head of the Human Resource department at the Teacher’s Service Commission, added that this is mainly an adoption of a set of explicit frameworks for embedding ICT into the current setting of education. “We had and still have a great need to acquire more teachers conversant with the ICT sector as a commission and this is one of the initiatives that will help us achieve this.”, Mrs. Maundu said in an exclusive interview with Juuchini Media.

“We expect 20,000 teachers should be trained by June via a total 15 hubs all over Kenya and over 100 thousand students and learners to be reached by June of this year.” Said Joe Lemaron, Regional Project Manager at the British Council in charge of Badiliko project.

Mark Matunga who heads Educational Evangelism at Microsoft East and Southern Africa affirmed that the main aim of the Badiliko project is to reach as many educators as possible and to build capacity as well. Microsoft committed a total of 500 Million Dollars to set the Badiliko Phase 1 ball rolling. For Phase 2 starting 2013, MS also plans to give a similar amount.

The initiative has started off with deployment in 6 African countries and with a large footprint of 114 countries around the globe.

“We need to enable our children to compete globally hence this project. There needs to be no discrimination and they will ride on the country’s backbone for growth and this is the only way they will have a chance to compete on a global scale.”
Microsoft put in 1 Million US Dollars and British Council matched the amount. Microsoft has different MOUs in different countries and this is the criteria that they have used to select the African countries that have benefited from this Badiliko initiative.