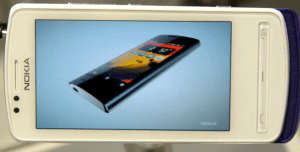 The Nokia 801 has apparently been leaked. From images posted online it looks like it is going to be a very smart device. Speculators say this Nokia 801 could be a successor to the where the Nokia N9, a MeeGo device, left off.

In an interview with Juuchini and other print media journalists today 9th (February) at the iHub, Martin Gicheru of Techweez asked Stephen Elop whether the Nokia 801 exists but Stephen denied knowledge and said he wasn’t at liberty to announce product details at that particular forum.  (video coming soon) He further added that any new devices would be announced in due course.

The Nokia 801 has been rumoured to run on a 1.4GHz processor with 512MB of RAM. The screen is quite standard weighing in at 4 inches, but in Clear Black display and AMOLED. This device will also come with an inbuilt NFC chip for Near Field Communication connectivity. The camera matches up to the Nokia N8’s 12MP primary camera and it can Autofocus on a 1080 pixel video as well.