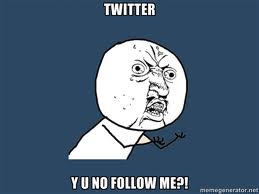 There has been a social revolution all around us. And many people I know are on Twitter. I also was lucky enough to have a chat with a high profile client last week; this client wants to be heavy on the social media front. Upon prodding, they revealed that the reason they don’t follow many people is that there are many ‘wajuajis’ on Twitter.

You, my friend, may need to reposition your mind on this issue. Here are a few reasons. You really want to have a huge Twitter following, here a few tips:

So grasshopper, go out there and follow some people. Do it in open spaces, not in white vans though, that is just plain stalkerish. 🙂