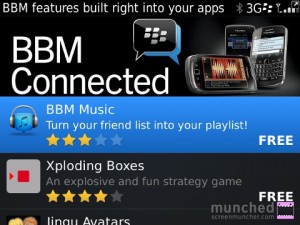 A series of updates of popular BlackBerry® apps will be released over the coming days to make it even easier for users to stay connected with their BBM contacts. Research In Motion (RIM)on the 12th of April announced that Facebook for BlackBerry, Twitter for BlackBerry, BlackBerry Travel™,  BlackBerry App World™ and BBM Music will now include BB Messenger connectivity. This would make it easier for users to stay in touch with their contacts, share experiences and content, and discover new things from their BBM contact list.

“Since we provided developers the means to build BBM connectivity into their apps, we have seen more than 800 hundred new BBM-connected apps come to market, which has been followed by a huge uptake by users – about one of every five apps being downloaded on BlackBerry App World is a BBM-connected app,” said Alec Saunders, VP of Developer Relations at RIM.  “Today we’re excited to announce that RIM has also integrated BBM connectivity into a number of our own popular apps and the BBM-connected revolution continues to grow.”

What are The Upgrades:

App Sharing – With BBM (V6.2) and BlackBerry App World (V3.1.2), users can now easily update their BBM profile to let their friends know about the great new app they’ve just downloaded on BlackBerry App World. With this updated V of BlackBerry App World, BB enthusiasts can also instantly share info about their favorite app or a list of their installed apps with friends using BlackBerry® Tag although this is only available to BlackBerry phones with the NFC (Near Field Communication) hardware chip. BBM Music – Using enhanced BBM Music (V1.2), BBM friends can recommend music to members on their contact lists right from within the BBM Music app itself. This makes it easier for users to know what music their friends are listening to and possibly share this same music. The new feature even allows users to sample others’ songs before accepting new contacts on BBM Music.

Newer BBM – Alongside massive integration with BlackBerry App World, BBM (V6.2) now features a more polished, enhanced and more personal experience with a new-ish look. You now get several avatars (including animated ones), a simpler way of updating one’s personal message in their profile, and now users are able to quickly send voice notes to each other. Pretty cool, huh?