Cell·SDK, the cross-platform experts which enable application developers to seamlessly create new apps with their ‘develop just that once’ slogan, recently announced InMobi, the world’s largest independent mobile advertising network, as its global partner. This means that devs (developers) will now be able to monetise their applications across multiple platforms by inserting only three lines of code.

Cell·SDK, developed by Spanish technology experts Syderis Technologies, is a cross-platform solution of interactive applications and games using C# and .NET for Android, iOS and Windows Phone. Developers using Cell·SDKcan now monetise their apps by integrate advertising into their apps.

Terence Eden, Developer Community Manager at InMobi says that, “It’s increasingly difficult and expensive for developers to release on multiple platforms.  With competing ecosystems the norm for the foreseeable future, it’s imperative that apps and games are launched cross-platform simultaneously. Cell·SDKis a practical choice for developers. Using C# to write applications for Android, iOS, and Windows Phone is an innovative choice.  We’re also proud to sponsor the Cell·App Awards to reward the top 10 application developers who create a mobile application cross-platform with Cell-SDK.”

Daniel Vargas Pérez who is in charge of Responsible Online Advertisingat Syderis Technologies added that, “We were looking for an advertising network, which shared our philosophy of independence and had its finger on the pulse of the developer community. So, are thrilled to have InMobi as our advertising network of choice. The developer community continues to evolve and Cell·SDK knows that we need to make it easy for developers to make money –  that’s why integration of the InMobi platform was key.” 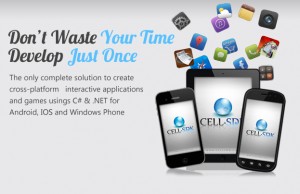