Dive into the BlackBerry Curve 9320 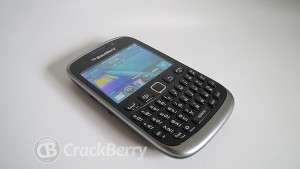 My BBM contacts @ninanjira and @ahendaa always used to ask me how to get radio on their BlackBerry smartphones. I didn’t know how to answer these questions so I always avoided both their BBM until the realized I didn’t want to admit regular BBs didn’t have FM Radio. Well, ladies, you can now have a BB that comes with FM Radio pre-installed. This is the new Curve 9320.

This new BlackBerry® Curve™ 9320 smartphone features all the core BlackBerry Messaging and social-centric features and offers global 3G connectivity backed by long battery life to allow users to make the most of their day. The emphasis here is on long battery life; a first from BB that even I want to try out now.

“The new BlackBerry Curve 9320 is designed to make it incredibly easy for users to stay socially-connected,” said Carlo Chiarello, EVP, Smartphone Business at Research In Motion. “The new BlackBerry Curve 9320 will be especially popular with customers upgrading to a smart-phone for the first time and existing Curve customers looking for a step up in speed and functionality.”

The Curve 9320 has everything a customer would need to stay in touch with the people and things that matter most to them. It features the following new out-of-the-box features;

The rest is the usual:

Another exciting feature that is bundled in this device in the BlackBerry Curve 9320 is the new 7.1 OS version, which is the only BB OS that allows one to use their BlackBerry as a Mobile Hotspot and Wi-Fi® calling where available. This however doesn’t use the data plan on the BlackBerry; it eats into airtime and may necessitate a separate data bundle plan on different service providers. This OS is available for download on other BBs that run BB OS 7 as an upgrade and it is worth noting that the Curve 9320 comes with this new OS as a standard.

I shall hopefully get a chance to play with this one soon; I hope Big Brother is listening :).