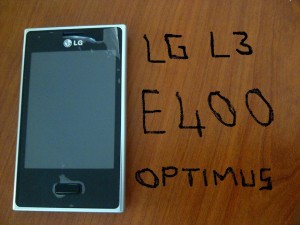 From the beginning: I invited a friend over to an event I was helping host over at KIE office on Muranga road and while we were there, I noticed he had a new white phone. “Nice looking phone” I thought to myself. “I wonder if it is as good as it looks.” Luckily enough, @Kachwanya had an extra one to give me to review so here goes. He told me it is called the LG E400.

The first thing you kind of notice about this device is its colour. It is black on the front and features a silver sort of ‘uni-body’ on its seams and sides. The back cover comes in either white or black. I preferred the white since I pride myself in being very clean (or at least I like to think). The back battery cover can be interchanged between black and white which gives a good feel of choice for users.

The SIM card goes under the battery; Memory card goes on the right side slot on the phone (screen up). This is a pretty standard arrangement nowadays although you have to be careful some bugger doesn’t steal your memory card as they ask to ‘play’ with the phone.

From battery out to home screen takes 30 Seconds flat which is much quicker than my other phones (a BlackBerry and a Nokia E6 running S. Belle) although I guess boot times depends on how many Apps you’ve installed and are running in the background. I must at this point note that I had not installed many Apps on this test unit. This phone runs on 2.3.6 Gingerbread. It has 384MB of RAM.

The LG E400 features a 3.2inch TFT (240*320) pixel display which was surprisingly good when I browse the web. See the image beside 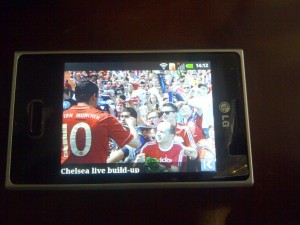 I took on Saturday before the Champions League clash between Bayern and Chelsea (hats off for Chelsea for a German squad well screwed well done). You can almost make out all of 100 or so faces on that image on the UEFA website. That is how good the screen resolution on this phone really is. The phone also features an accelerometer to change between landscape and portrait views on home screen and in app. This is useful when writing an email on Google mail which is standard on any Android Device.

The entire device only has 3 buttons: home screen button, power on button and device volume button panel. The other two are the ‘back button’ and the ‘alternative menu’ button. Long pressing the ‘alternative menu’ button leads straight to the Google Search Bar. Nice little trick I must say. Long pressing the ‘back button’ while in the browser led to the Browser History. This is a neat little trick too. The top plane of the phone has a 3.5” earphone plug to the extreme left of the power button. This device plays music on a particularly high volume for music and for FM Radio as well. So I guess you can use it as a substitute alarm clock. J

The Camera -*twitches* I feel that LG could have done better with this one. The device boasts a 3MP camera which unfortunately does not autofocus very well in low-light conditions which is the case with most indoor self-shots. I found this out as I tried to take a picture of a guy who sat drinking a cold tusker and picking his nose simultaneously and ever so carefully. That Twitpic would have been extremely hilarious. I would have gotten many retweets too. The camera does however take good pix outdoors when there is enough sunlight. It must be something to do with the shutter speed or some automatic ISO selection that messes up indoor shooting. Please give this phone’s upgrade a simple LED flash for night shooting. This will make the experience a whole lot better. One has an option of storing media like pix and video on the onboard 1GB memory or a separate memory card. Good thing memory is expandable to 32GB. An image on this phone averages 400-500KB. A 9 second video recording comes to 2.32MB in mp4 format. Not too bad either.

Connection to WiFi on this LG L3 E400 Optimus was fairly easy. It behaved well and most sites were resized and the formatting looked on-point because of active HTML5 support. Many times, Opera Mini messes sites up and fails to detect the mobile versions of web-pages but not on this phone. Even the phone’s native browser works well to deliver content to a user. Data on Mobile 3G was also good. The only problem seems to be the permanent connection to the internet which is characteristic of Android. This, coupled with Safaricom’s retraction of their unlimited data for 200bob a day offering, will mess up your airtime. Luckily, you can control the data by cancelling sync to online data.

I slipped the phone into my backpack and accidentally forgot to power it down. I was rushing home to let my dog out of the house before he peed on my couch like last weekend. That is what he does when I don’t let him out every 6 hours. This was on Saturday. I just remembered I have the phone in my backpack. Today is Wednesday. I must therefore commend the battery life of this phone. Most devices would have drained out by final hours of the 2nd day with some active data still working on the phone. But not this one. By the time I remembered that it was in my bag, only ¾ of my battery was gone. Well done LG!

Everyone’s got a phone nowadays though. It always boils down to whether or not someone would buy this phone. Price point and usability are the two most prevalent factors considered when making that purchase. So, would I buy this phone? If it is priced generously, Yes. If it is priced anywhere below 12,000 KES, definitely! Would I recommend it to anyone? Yes. I am not a big Android fan but between the hundreds of cool things @martingicheru keeps showing me on his Galaxy SII and the huge community these .apk devs building, they are a force worth reckoning. As a spare-time developer, this could be a good device to do your beta tests on as it’s proven to be a stable phone.