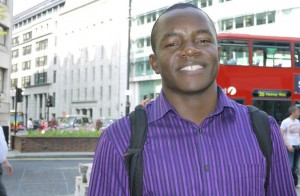 For those who have not been lucky enough to interact with Kenneth Oyolla, more popularly known as Ken from Kenya, he is the humble chap who headed Nokia as GM for East and Southern Africa up till sometime in January of 2012. He now holds the higher role of Global Head of Market Activation for Mobile Phones and sits in a big office all the way in London.

I had a chat with Ken on phone a while back and felt compelled to ask him how he’s coping with the new environment so I did a nice Q&A with him. Here’s what he had to say:

Juuchini: How has the shift been from local office to global office? What is your experience so far? What has changed?

Kenneth Oyolla: I see my move to from regional general management to global as two sides of the same coin. On one side you have a big team to manage that looks after a smaller region whilst on the other side you have a smaller team of specialist to manage that look after a global business. Whilst as General Manager “your word is the law” and goes and you bet your job on your decisions, in global you have a lot of matrix relationships to manage and you have to hone your rapport building skills as well as influencing skills to achieve your goals. You also have to contend with different time zones like the call I have to take weekly with teams in Sydney because there is a 12hour time difference. Different cultures also kick in when you have to deal with Chinese, Indian, European and American colleagues as well as the complexity of dealing with virtual teams using technology like video conference and Halo.

Juuchini: Having worked on the local level and seen the differences, what are your plans for the local market now that you sit at a global office?

Kenneth Oyolla: When you work in a global multinational at a local level, sometimes you do not grasp the decisions that a business has to make at global level that impacts you. Now that I understand more of this, if I were back in a regional role I would be able to better  position the local business so that we anticipate rather than wait for global decisions to be made. A simple case which I have always believed in before and now even more is this: alongside bigger economies like Brazil, India, Russia and China, you may not punch much when it comes to the size of the business that you do BUT you can STAND OUT by being the most efficient business, with the best talent, fastest growing et al…Just make sure that you stand for something. 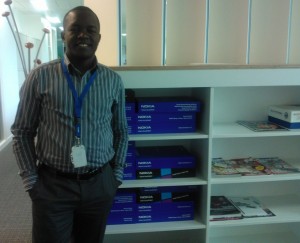 What is your global agenda with the new posting?

A few weeks ago whilst still fresh in London, I was invited to be a panelist at the Cambridge Judge Business School. The conference was about doing business in Africa with eminent personalities like HE Olusegun Obasanjo and the Vice President of Zambia in the panel. In there, I stated what I believe is my key agenda while out here, which is to be an “apologist for Africa”. What do I mean here? A lot of the narrative about Africa and decisions made about her are largely by people who have limited working knowledge on Africa or who have not really done business in Africa apart from looking at economic, financial political and social indicators on Africa. As a result stories on Africa have not been told well. In a small way, I hope to be like that little singing bird that Prof Wangari Maathai referred to in her acceptance speech as a Nobel laureate.

ON the other hand I also believe that this role offers me the opportunity to look after exciting markets in Latin America, Europe, SEAP – South East Asia & pacific as well as China. There is a lot to be learnt and I look forward to stealing with pride some of the nuggets that have made trailblazing countries in these regions the darling of global economists

How has your social life changed after the move? How is the family handling this change? How long do you intend to stay in global office before you come back home?

This is an interesting question. Over the past four years I travelled vastly across Africa and the Middle East hence I was not at home much. This made it a bit easier as I did not have much of a big social circle to walk away from. Coupled with this, the last two years as a young General Manager were lonely, as some may get to know when you step into a leadership role. That said, I desired many years ago that I’d want to work in London and this is my desire fulfilled. London is an exciting city and very rich culturally as well as historically. I am big on concerts and plays and I couldn’t be in a better place. It is pleasing to note that the public system works and much as I have a car but I hardly use it and I love blending into the crowd from the Holland Park tube station to Piccadilly Circus where I have to get off. I have shed my suits for more appropriate attireJ My two sons Keith & Kyle are still struggling to understand why the sun sets at 9pm and is up at 4am. I do hope they settle well and find the right schools for them

Any key learning’s on managements you would share with local managers in terms of managing resources and people to make the shift to ability to manage global-like facilities?

One key thing a young manager just into the corporate world needs to determine is to shift their mindset to see themselves as global citizens. This is the start of it all. When you imagine that you are competing with a fresh graduate from New York, Mexico City, Hanoi or Jakarta, you start thinking and doing things differently. Today, unlike our days (I’m not that old) the internet is a big equalizer. The internet is not just there for Facebook and twitter but is a rich repository to arm yourself with knowledge in whatever area you need. Use it to broaden your world knowledge and understanding before you jump on that plane.

At the end of the day the adage holds true that if you are faithful with the little you will be entrusted with more or like Song of Solomon 2:2 in the bible says: Catch for us the little foxes, the little foxes that ruin the vineyard – meaning take care of the little things and the bigger ones will fall into place 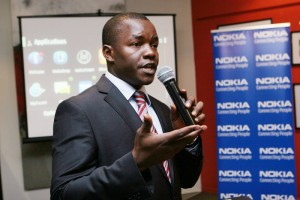 at a past Nokia Ovi Happy Hour Event

Outlook on IT and Mobile infrastructure that you think Kenyans (and East Africans) should consider investing in to boost relevance in this dynamic market?

East Africa is blessed with a good talent pool and we are making headway in many ways. However I don’t believe that we should rest on our laurels.  We should also recognize that while we have the talent but the funds do not necessarily sit here. The key thing for a developer is to be the best in technical skills and business management so that they can attract venture capital or angel funding from the capital hotspots where fund managers sit like Brussels, New York and London. It would be great to see e.g. John Waibochi selling his business for $2B to a Silicon Valley blue chip company because they realize that the only way to get the skills that Virtual City has is through acquisition of the talent and the know. I also believe there is a lot of opportunity in the sub region. Whist Kenya is a leader but we have not looked yonder into Uganda, Mozambique or Angola to see how we can grow there.

Do you think emerging markets have a real chance in the Tech Scene? Why?

I strongly believe that nobody knows Africa better than Africans. The social fabric upon which we build out business models is different from Europe and only we can understand that. If we use this as one of our key competitive advantage and always seek to be globally competitive then we will excel. It would be great also to see more unique innovation and less of me too innovation coming up. If I were a blogger I’d be endeavoring to learn how to write code or to learn the ropes on doing business as this is the time for Africa like the clarion call for the World cup says: Ke Nako! (The Time Is NOW!)

Are we far from the ultimate marketing experience in Kenya as you have experienced in London so far?

I started my career as a graduate management trainee in marketing, so being back to marketing in the latter years of my life has been nostalgic. From a pure sense of marketing, there is a lot that I relate to when I walk around, watch media that I relate to deeply. That the brands I see are built on solid Brand promises and essence hence why they have survived over 100 years. The UK is steps ahead when you think about how they market everything, from public service like trains and business which have functional websites and communicate effectively to consumers to Local government which makes it its job to engage and market effectively to residents to marketing in retail. In closing I saw this interesting physical fitness programs one of which was targeted at the “bride to be”! That blew me away.

To all the young people out there wanting to trail-blaze. Don’t just exist; You need to live!My advice is as follows