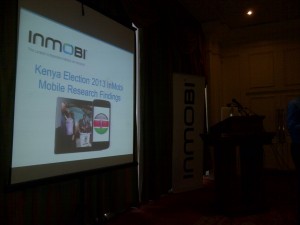 Kenya is facing an election year in 2013, about 6-8 months from now depending on how you look at it. This would generally mean that there is no better time to reach a broad audience come voting season for political parties than now. So InMobi went ahead and did a study on what matters most to Kenyans beliefs are as far as they’re tie-in with mobile are. Findings reveal that what matters most seems to be policy and how they get to hear vis-a-vis interact with information as this is key to informed decisions.

Quick Comparison: Barack Obama in his first campaign massively used digital, online and social media to reach out to would-be voters and wood them into voting in America’s first Black president. Barack managed to position himself as the ‘new marketer’ and was able to identify with users views online hence ‘clicking’ his way right into the house on the hill. You see, any new-age political election is much like a marketing campaign showdown, and the team with the best product usually, and as expected, sways the biggest audience. More than anything, Obama’s campaign showed that online and social media could no longer be ignored.

A Look at Now: TV and Radio are still predominant in dissemination of political information in Kenya. Regardless, mobile is catching up and it is catching up fast. In fact, according to recent research released by InMobi, 33% of Kenyans prefer receiving messages via TV, with 20% preferring to hear their news via the radio; this is likely to be in the form of news broadcasts with a total of 53% share being taken up by broadcast media. There’s a challenge though; only about 750 Thousand Kenyan homes actually have a TV hence proving that reliance only on electronic broadcast can be an expensive affair. This leaves the gap wide open for Mobile, which is catching up fast as the preferred method of communication from political parties. The argument here is that while you may be unable to carry your TV everywhere you go, your mobile is always by your side. In fact, as far as preferred methods of communication go, mobile was just 4% lower than radio at 20% (16%), with a paltry 14% of respondents preferring print (newspapers and magazines).

Mobile is a game changer. Mobile has largely been able to alter financial landscape in Kenya and it is beginning to change-up the political landscape as well. People want information in form of clear and concise messaging in regular frequency.

A follow-up survey done following Obama’s notorious campaign asked people what one word they would think of when they heard his name, the word CHANGE was mentioned by the majority of the people surveyed. Kenyans are looking for this information; 46% of the study participants said that they would welcome information from the party of their choice on a daily basis. This then begs the question, if you accept mobile as the most effective way to reach people, and you know how to do this, what are the kind of things they need to hear that are going to push those triggers we mentioned? 75% of Kenyans want to know about party policy, closely followed by 74% who were interested in the key issues that would be addressed by the party. Interestingly, 58% were even interested in receiving party memorabilia such as wallpaper for their phones – difficult to imagine a more effective marketing tool than being on the face of hundreds of mobile phones.

Innovation in the mobile space has extended to social media especially since most Kenyans access social media via Mobile Phones. Effective campaigns need to deliver information to people online as a primary tool, not an afterthought. Citizen Journalism also cannot be ignored especially because of the power of their messages over Social Media. You can effectively argue this out after earthquakes in Japan were reported first on Facebook before being reported on any mainstream media that can be argued to have prompted CNN’s iReport mobisite and phone App features. The Logic behind Social Sites is the taking advantage of Combs Fuzzy logic (like a reverse neural network) in a ‘friends trust friends’ schema (52% of respondents said they were strongly or moderately influenced by their friends’ views).

Likewise, mobile integration into a campaign and establishing an interactive tool to reach people can gauge their concerns. High on the Kenyan agenda are:

That said, Kenyans at the lower end of the income bracket (x<10,000 KES) are surprisingly optimistic about the future of the country with 72% of respondents of the opinion that the economic situation will improve. Higher earners making (x>10,000 KES) were on the fence, with 24% believing the situation would radically improve and  a similar 23% thinking it would get worse. Only 10% of voters think they will vote the same way as they did in 2007.