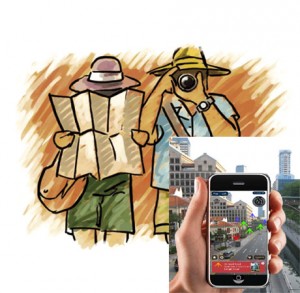 Africa is a major destination for tourists and With tourists increasingly using their mobile devices to plan their travels, Visa and South African Tourism have thrown down a challenge to developers across sub-Saharan Africa to build the best travel app for the region’s burgeoning tourism industry. The Africa App Quest, which was launched at the E-Tourism Summit in Cape Town recently, aims to get regional developers building authentically African apps to capitalize on the continent’s growing popularity as a global tourist destination.

South Africa Tourism estimates that a third of all travellers have a travel-related app on their smartphones, which they use to book travel, find tourist attractions and share experiences via social media. Google says the number of mobile users researching travel on their mobile devices will grow by more than 50 percent in 2012 alone. “There are hundreds of international travel apps out there, but we think this is a great opportunity to create homegrown apps that really capture the feel of Africa and enhance the tourist experience of the continent,” said Claire Olverman, Head of Cross-Border Marketing for Visa Sub-Saharan Africa.

This competition encourages mobile application developers to create apps for any mobile device or platform, including Apple’s iOS, Google’s Android and the Windows phone platform. They also have free rein when it comes to the purpose of the apps, says Olverman. Entries can include anything from:

South African Tourism’s Global E-Marketing Manager, William Price says the Africa App Quest is “hugely exciting” for both developers and the broader tourism sector. He added that SAT acknowledges that technology is critically important to the success of the tourism sector and this is a good opportunity for local developers to build applications that can be used on a global level.

In Kenya a number of Kenyan tech-preneurs have successfully developed mobile applications that have significantly revolutionized the way businesses and consumers interact. One such tech-preneur is James Mwai who built Around Me, a mobile app that looks at your GPS position and lists all the facilities around an individual, such as hotels, petrol stations and clubs. By February this year, it had received more than 250,000 downloads.

“I encourage all local developers to take part in this challenge. It’s a great opportunity for Kenyan developers to focus on an app that would benefit both domestic and international travellers to our country, tourism is one of the sectors that has really owned the tech and mobile space and it is wonderful that this competition will further stimulate creativity in the tech sector,” commented Mwai.

The Africa App Quest will go live on 1 January 2013 on the E-Tourism Frontiers website www.e-tourismfrontiers.com. Competition rules and details around the main prize for the competition will be available when the site goes live, and there will also be a dedicated Facebook page that will give regular updates about the competition.

The winner of the Visa Africa App Quest will be announced at the E-Tourism Africa Summit in September 2013.