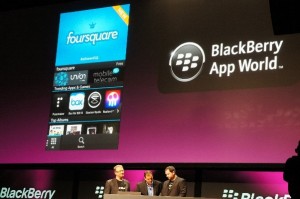 As you’ve likely heard, BlackBerry AppWorld is now accepting app submissions for BlackBerry 10! This means that apps submitted to the store starting October 2012 will be guaranteed to be reviewed and ready for launch.  This is a huge opportunity to be the first into the store and to capitalize on the app-hungry market.

The sooner you get your app into the store, the sooner it can be tested for the Built for BlackBerry program; and if it’s tested and is certified you then qualify for the 10k Developer Commitment.  And to top it off; they’re going to give you preferred carousel placements as a thank you to devs who get their apps into App World in October and November. How can anyone beat that?

Even more reasons to submit your app!

·         BlackBerry users want your apps! Make money and be part of the shared success of BlackBerry 10.

·         BlackBerry 10 allows you to create a unique and viral mobile experience.  Create apps that are beautiful, integrated and social.  A quality app is a more successful app.

Developers need to be using the Beta3DeveloperSDK which was launched on September 27th 2012 to create their apps; anything previously submitted needs to be recompiled using this software and resubmitted.

Be sure to read http://devblog.blackberry.com for more info.