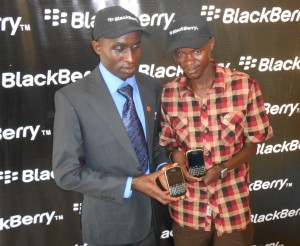 On the left is Samuel Muchai Kimani. He is a Gold medalist in the recently concluded Olympics and he participated in the Paralympics men’s (T 11) 1500m competition where he represented Kenya and won. T 11 is a category for visually impaired athletes.

Right next to him is another exemplary Olympian, Abraham Tarbei, who won gold in the Paralympics men’s 1500 m race category T 46.

That would mean that BlackBerry recently got up to some very golden activities things. And I do mean some actual Golden activity. *PUN intended*

In recognition of the Gold Medalists in the 2012 Olympics, RIM which stands for Research In Motion, decided to gift these Kenyan athletes with these golden BlackBerry phones.

The Canadian company decided to show a lot of faith in the Kenyan team (and other Olympics teams worldwide) by gifting them this expensive item. Word on the street is that there are only 200 of these in the entire world. 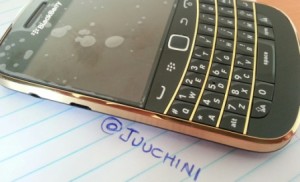 The phone is a BlackBerry Bold 9900 designed limited edition smartphone-in-Gold. Word on the street is that only 200 of these smartphones were manufactured globally.

And Kim Kadarshian uses one too. See her tweet. Blackberry UK  promised out one (just one) to one lucky fan last month. See the competition deets on Crackberry.