My Date with the Ultimate – A Review 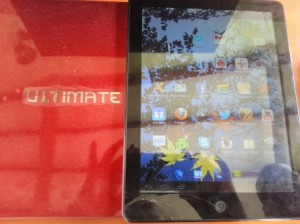 If you haven’t noticed yet, my title Rhymes. I am deep like that.

There has always been an issue of affordability of machines. Students always need machines and it is unfortunate that they cannot find cheap, ergo affordable, machines to use for class work. I say class work so I can include everyone from the working student who rushes across town to catch classes as well as that young 15 year old. I hear they’re also given assignments to type out nowadays. I know, I know, we’re old.

So I got a short, albeit satisfying opportunity to play with the tablet by ICT Consultants. I also spoke to the guy at the stand, and he tells me that they manage to make their own stuff by sending specification to manufacturers to get nice hybrid and fast machines. I should also say affordable because that is a key differentiator.

The core comes in 2GHz CPU. Of course it is Intel, so we know it will last. There’s also the 1GB RAM. This means you will not have issues of speed however heavy your computational stuff is. Another key factor here is the 8GB ROM. Unfortunately, I don’t understand what they mean by ROM so I shall take the high road and say it is good despite being clueless as to what the guy meant by “Iko na ROM ya 8GB boss.” Operating System is the Android 4.0.3, an upgrade to Android 4.0. You will see this when you touch, or rather poke, the screen. I love doing that on Android devices… poking the screen that is because it responds with the water ripple effect. Yes, I may have missed a few of steps in my childhood. We all need to be able to do a quick Skype call on the go, or Google Voice call on GMail so there’s a front facing camera on this tablet. It clears out at 2MP for the front facing and just 1.3 at the rear camera. I would have wanted more from the rear camera. I take a lot of pictures. The rest of connectivity issues should come as a standard and they do on this device. This is the Bluetooth radio, WiFi radio (802.11g). Oh wait! It has a 3G radio as well. Yeah, you can put your sim-card in there and buy a bundle for data or actually make a phone call. I wasn’t too excited about the idea of typing an email on this huge screen so there a USB keyboard facility for that. Good stuff! Now I don’t have to get the screen all smudged up when doing text.

Then there’s the gravity sensor. I need to clarify. This is an advanced form of the accelerometer you would see on modern devices only that it also returns the influence of gravity.

I played a track on it and it has got pretty decent speakers. Don’t go too loud though as you don’t wanna tear them apart. This is coupled with HDMI support for all my High Definition videos for output to an external HDMI screen that I can play off an sd media card which this device also supports. Be careful not to play high def videos on other non-specified devices as the VGA tends to burn out. But not this one. It will play those comfortably. Voice command allows you to do a voice dictation to it and it will translate into action.

I don’t know about the battery life as I didn’t spend enough time with it. All I will say is that is harbours a 8000 mAh rechargeable battery. This is a big battery that should give you decent hours away from a power source although like all 3G devices, it could prove to be a pain if left on automatic sync mode.

The tab weighs in at less than 1 KG. Which is a good thing because I can carry it with one hand without worrying about one-armed fatigue.

Overall, I enjoyed the experience with the tab in my 35-minute date with it. It should come in under 30,000 KES which makes it affordable. It should do well with all the features it supports in an ideal situation. In fact, I think if it supported anymore stuff, we would have to call it the Activist Tablet. BAM!