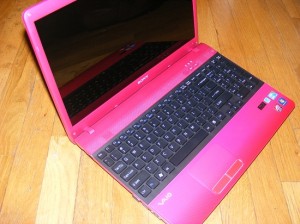 Sony has just launched a new line-up of its VAIO laptops in the Kenyan market. With two new models namely the VAIO S and VAIO E Series, Sony plans to tap into the growing market for high performance, portable laptops that transition easily from office to home, providing consumers with top range performance in a stylish yet functional package. The laptops have been built with consideration that consumers are working and communicating on the go. The new line-up fuses speed with sleek high-end designs to present a sturdy easy-to-carry laptop ideal for business, on-campus and on-the-move use.

Both series in the new line-up come equipped with Microsoft’s latest flagship Operating System, the all new Windows 8 in 64-bit and 3rd generation Intel core processors. The VAIO S Series however feature an Extended Battery for that extra juice on the go and a slot-in optical drive. The slim design on this laptop looks good I must say but the way it is built maintains rigidity of the frame.

“We appreciate that in a market where the pace of life is increasing, consumers need their laptops to be fast, functional and easy to carry, which is why these series are designed to provide powerful computing performance that essentially makes them full-featured mobile PCs with all the technologies needed for full mobile computing,” says Shibuya Akira, Senior Manager, VAIO Marketing for Sony in the Middle East and Africa.

The in thing nowadays is something called Consumerization of IT which allows a user to move around with their device without giving up any functionality at all. It is for this reason that most people nowadays are choosing to use laptops over PCs for the workplace, for their homes and school use.

It was duly noted that, “Not only do consumers want laptops that work; they want laptops that are designed with them in mind, which is why in addition to being powerful, fast, portable and sleek, our laptops also come with features that enhance the Sony VAIO experience.” Says Mr. Akira, an exec. who works for VAIO. Another key feature on this laptop is the sound quality add-ons called “xLOUD” and “Clear Phase” technologies which are used to cancel out distortion caused by boosting volume levels to give clear sound. This is going to be well appreciated by guys who are into gaming on laptops.

The laptops also have an in-built HD web camera for clear video calls either on Microsoft’s Lync or Skype, PlayMemories Home photo editing feature and a dedicated ‘ASSIST’ button that allows you one-touch access to VAIO Care for basic maintenance services. If you want this laptop, head on down to Redington (ask for Julius Muhia) or Anisuma Traders (ask for Manish Gokals) and tell them I, Murage, sent you. You will not regret.