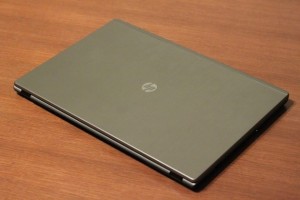 First off, let me start with the specs of the Folio ’13 machine I was using.

18mm thick when closed, the build quality is pretty firm with a silver brushed lid giving it a premium look. The unibody design makes it solid to hold even with a plastic bottom, adding to the already prime look, a premium beveled finish. The plastic finish underneath however it’s quite the finger print magnet (but then again, who will be looking for fingerprints under your laptop? No-one! No-one will.)

Carries a 13.3” LED backlit screen 1366 x 768. The screen is much smaller than the space carved out in the cover. When it’s off, you get the idea the screen has a thin bezel. However when you power the machine on, you notice the view doesn’t stretch to the tip of the bezel. For those with some compulsive disorders for everything to fit where it’s supposed to be, it may annoy you slightly. Otherwise it being such a bright screen, you will not notice the difference. The reflections that bounce off the screen on this machine are quite bright. So please avoid its glare. You will probably want to switch off any lights above or behind you when using this laptop. You will tend to concentrate on the bright lights reflecting than the content on your screen (at least that’s what happened to me until I sat somewhere away from too much light). With a 13 inch screen plagued with reflections, watching a movie will become an art – the angle of the screen has to be just right. Oh! Another thing; When closed, the screen tends to pick up the outline of the keyboard – so best carry a piece of cloth to wipe them off every so odd often. 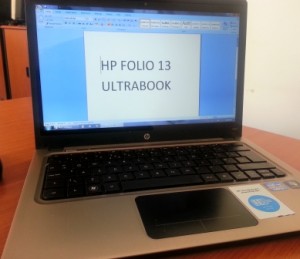 The keyboard is well spaced and the backlight makes it usable in dark places while not blinding your view to the screen. The HDD and power LEDs are located on the left side of the laptop. So there is no distraction of blinking lights as you do your work.

Moving on to the big touch pad. Its default settings are not sensitive enough. So I had to make a few adjustments prior to using it. I did get a few confused instances where my palm would brush across the pad and change cursor position as I type. If I were you I would still keep my Microsoft arc mouse close-by until I get used to the track pad.

My colleagues and I managed to get close to 8 hours of light use out of the HP Folio 13. It does very well for a full capacity laptop, which I must say is incredible. I even stopped carrying the charger with me when I left the house. When doing my data analysis it would last me around 6 or so straight hours. Still well within expectations of the average multitasking business user. The device does claim a 9 hour battery life though. I am yet to push it to this limit. I shall do so very soon.

We put the Folio 13 through some benchmark tests to relatively measure its processor performance and finally a disk intensive test using a the IDEA data analysis tool to see the gains of the Solid state Drive against the standard hard disks.

Super PI is a computer program that calculates PI to a specified number of digits after the decimal point. Super PI is used by many overclockers to test the performance and stability of their computers. Super PI utilizes a single core of the processor. To calculate up to 1 million digits of PI after the decimal point we compared the performance against a desktop 2nd generation core i5 2500k (3.3 GHz), 1st generation laptop core i5 – 520m (2.4Ghz) and the HP envy core i5-3317u.

It should be noted her that the 3317u is third generation core i5 and the 2467 is 2nd generation technology. However the older generation outpaces the third generation in this test, even though they are almost matched on core speed (1.7GHz vs 1.6GHz), because of the SSD (Solid State Drives) in the Folio 13 that improves the read and write times.

The other two (i5-520m and i5-2500k) all run at considerably higher stock speeds than the two HP laptops.

CINEBENCH is a real-world cross platform test suite that evaluates your computer’s performance capabilities; The CPU test scenario uses all of your system’s processing power to render a photorealistic 3D scene. This scene makes use of various algorithms to stress all available processor cores.

The Folio 13 comes closer to the newer i5-3317U in this test due to the small gap in core speed but still lags behind the older more power hungry family member, i5-520m which runs stock on 2.4GHz and has a turbo speed of 2.9 GHz. We will not even discuss why the i5-2500k is up there now; it is rather obvious.

IDEA data analysis is a business tool used to import, analyze and export data in various formats from various databases. Part of its functions is a disk intensive operation that involves indexing data. We tested the function on the HP Envy, the Dell with a standard 5400RPM Hard drive and the HP Folio 13 with an SSD drive. The function involved indexing a database of 690,000 records (6 GB file) based on three fields each containing over 400 characters and then creating a new sorted database.

NOTE: The earlier tests were all synthetic, this is a real world application test. I should probably point out that this is what I do for a living. This is what pays my bills.

The test involved manipulating the file to sort it by the first column then sort by the second and finally sort and extract by the third column. The hybrid drive flexes its muscles during this process and draws out an incredible 12 minutes average in performing the test against the standard hard drive however the Folio 13 literally runs circles while wiping the floor (yes both ) with the competition easily with an average of 80 seconds in this test.

Piece of advice for those in my line of work; GO AND BUY THIS MACHINE. NOW!

The scientist in me was still not convinced so we took another test with the Folio 13 Ultrabook. This second test involved exporting the sorted database into an CSV format for further use elsewhere. 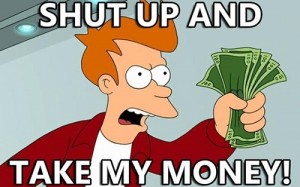 In the words of modern cartoon memes, HP! Shut up and take my money.

First time I did this with the Folio I couldn’t believe my eyes. Thought I’d done the tests differently. So I quickly wrapped the test in a script and ran it concurrently on all machines. Needless to say I stopped doing heavy duty data analysis on our office server. This laptop picks, does analyses and exports data faster than a Dell R410 server could index the data. The only limitation was the size of the SSD. Getting this laptop with a 256GB or even a 512GB SSD will make it an even juicier prospective.

The small-ish screen with its angling reflections definitely is the first issue for this piece of hardware. We understand the small screen though. The smaller it is, the more portable it becomes. We get it.

The SSD in the Folio 13 is blazing fast!! The business test alone is worth the price of this machine. Saves you time and improve overall system performance exponentially. However you will not be using this machine to store your huge files. An external drive is defiantly a must when you get one of these. Filling up 128GB nowadays is child’s play. But the Folio comes with a USB 3.0 high speed port ensuring you are covered when you wish to quickly transfer files to and from the laptop.

As the SSD technology continues maturing expect to see higher capacity drives out there, defiantly something to look out for. These drives apparently consume much less power than the normal drives as well, contributing to the battery performance of the Folio 13 too. You can confidently spend a day out of office with this machine. However when you want to do a presentation, ensure you have with you a HDMI to VGA adapter for most of the projectors you will meet out there don’t have HDMI configured as an input port and if they do, your host probably doesn’t have that cable.

I need to go now. I’m off to Redington to buy me an HP Folio 13 Ultrabook.