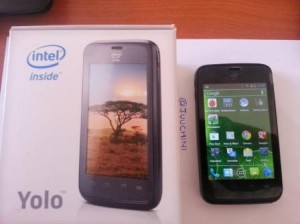 When you first come across this phone like in the unlikely case you pick one up from the street, you might not know where it’s from or who the manufacturer is. Reason being, it has only 2 brands on it. These 2 brands are Intel and Safaricom. This means you will at first be unsure who manufactured this device but if you’re keen enough to search for Intel, Safaricom smart-phone, you will probably stumble upon a CES 2013 Daily Tech article that tells you where it is from.

This is the first Intel smart-phone in the Kenyan market. Yes! Intel now has a smart-phone for Africa.

I’ve had a chance to play with this one for an entire week. By play, you must already know that I mean ‘stretch its limits to see just how much it can handle’. If you don’t know what I mean by play, you need to read my blog more.

The usual way to do this would be to pop a sim-card into its tray and use it as an everyday phone. Everyone does this though and I find it too mainstream so I decided to use a different approach by using a different set of tools. These tools are called Benchmarks.

Benchmark tools are ‘freely available’ on the Android Play Store for most devices on the slightly higher capabilities categories. You know those devices that can play a full HD video without breaking a sweat and can handle more than 10 concurrent processes from email to a Grand Theft Auto paused game. This is one of them.

Our results on the YOLO device are as follows:

This Vellamo benchmark is kind enough to give information on the device hardware as well. It highlights that that the device model is a BT210 with a Dual 1200 MHz core and a 512 MB RAM on a 320*480px screen all bundled on the mfld (Medfield) motherboard.

We did the same test on a slightly used Samsung Galaxy S3. Here is how the S3 scored:

The Vellamo benchmark gives information on the S3 hardware as well. It tells us that the model is a GT-I90300 with a Quad 1400 MHz core and a 778 MB RAM on a 720*1280px screen all bundled on a smdk4*12 motherboard. This is the latest and best fashion Quadcore Android motherboard.

Our results in a Table:

As you have noticed from the benchmarks, the Samsung S3 is shining. The bigger question here should be ‘by what margin’? See, the S3 is a Quad Core so you should expect it to score pretty big on a marker like Antutu. Unfortunately, it doesn’t. In fact, in previous benchmark reviews, the S3 has scored even lower. See the Antutu website ranking list. The YOLO scored 12961. It will rank 2nd according to that list.

Other features of the Intel YOLO smart-phone include the following:

5MP Camera – This is a rear-facing camera that has a special burst mode allowing you to take 7 shots of the same shot and pick the best one from that. Something worth noting is that you can go to camera straight from the lock screen. This means you can capture those quick moments without having to unlock the device. The downside though is that it has no flash. It also doesn’t have a front-facing camera.

Operating System – Ice Cream Sandwich is a stable OS on this device. I am not sure it is upgradeable to a newer OS though.

512MB RAM – As compared to how much you would actually need on this phone, I have to say this looks a bit low. I foresee a situation where you’re running more than 4 high power and clock apps on this device and are forced to compromise between closing what is consuming a lot of RAM (e.g. games) and an App you actually just want to suspend.

Z2420 Smartphone Processor – This Atom Processor was announced at the CES Show a few weeks back. It is the first Intel low-power smart-phone processor built by Intel for its devices. What does this mean? It means Intel now wants to do its own smart-phones for the emerging (and other markets). Intel started this Atom line to power smart-phones and there were rumours that 2013 would be big for it in smart-phone releases. Intel dedicated a site to their new line which has products like the following:

Feature called Wireless Display – This can be shortened to WiDi. It is a new feature that allows you to transmit even High Definition data (both video and voice) wirelessly to a receiver called a WiDi Adapter. You then connect the wireless NetGear adapter to an output device like a projector or a monitor to view. It looks very nice and your friends will obviously be ‘wowed’.

Expandable SD card slot – This is expandable to 32GB for your music, movies and games.

The Intel YOLO! smartphone is an entry level phone for Intel for the African Market. It will retail at 10,999 KES (130 USD) and can be found at major Safaricom outlets. It will be a strong competitor to the Ideos which is about 3,000 KES (35 USD) cheaper with a whole new set of features on it. I don’t want to give it all away at once so I shall share the user experience a little later, coz you know, YOLO! 🙂