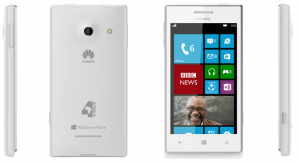 Microsoft Corporation earlier this month (on 5th February) introduced the Microsoft 4Afrika Initiative. This is a new effort through which it, Microsoft, will actively engage in Africa’s economic development to improve its global competitiveness and by year 2016 have done the following:

“The world has recognized the promise of Africa, and Microsoft wants to invest in that promise. We want to empower African youth, entrepreneurs, developers and business and civic leaders to turn great ideas into a reality that can help their community, their country, the Continent, and beyond,” said Fernando de Sousa, General Manager of the Microsoft 4Afrika Initiative.

He added that the Microsoft 4Afrika Initiative is built on the dual beliefs that technology can accelerate growth for Africa, and Africa can also accelerate technology for the world.

As the 1st critical step toward increasing the adoption of smart devices, Microsoft and Huawei have partnered to introduce the Huawei 4Afrika – a full functionality Windows Phone 8 which will come pre-loaded with select applications designed for Africa. This phone will initially be available in the following countries by end of February 2013:

The Huawei 4Afrika phone, which is the first in what will be a series of smart devices designed “4Afrika,” will target university students, students and mobile-application developers and more importantly 1st-time smart phone users to ensure that they have affordable access to good technology to enable them to connect, collaborate, and access markets and opportunities online; goals that are all in line with the IYF study and commitment to bridge the youth’s opportunity divide.

According to a blogpost on the Windows website, The Huawei 4Afrika device is a variant of the Ascend W1 launched at the Consumer Electronics Show in January 2013. The Huawei features a 4-inch 480 x 800 display, dual-core 1.2 GHz Snapdragon processor for powerful processing and multitasking, front and rear-facing cameras, and 4GB of internal storage that are all well fitted into a 10 millimeter-thin case. The phone is said to deliver a whopping 420 hours of standby time which is about 2 weeks thanks to its built-in power-saving technology.

Answering a question on why Microsoft is specifically targeting Africa with this new technology, Jean-Philippe Courtois, president of Microsoft international says, “We believe there has never been a better time to invest in Africa and that access to technology—particularly cloud services and smart devices—can and will serve as a great accelerator for African competitiveness.”

In addition to this Windows Phone running WP8 from Huawei, other OEMs already have a presence in Africa with the most predominant one being Nokia who recently launched the Lumia 620, Lumia 820 and Lumia 920 which are all available in Kenya.

“I’m personally excited to hear about this Microsoft – Huawei partnership because it presents disruptive possibilities in the African smartphone market. Huawei have long been known for positioning affordable handsets in the market and this is one of those times that you will see strong, light and affordable hardware coupled with the excellently consumerized Operating System that is Windows Phone 8.” commented Peter Nalika, a local blogger and senior journalist with CIO East Africa.

The Huawei device is expected to retail for between 150 USD and 200 USD although the real price will be dictated by the mobile service providers in each country where the phone will be delivered.