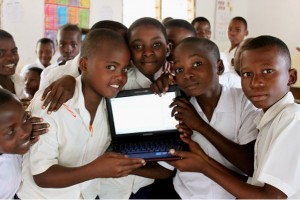 Back in 2011, I attended the IGF event at the UN HQ Gigiri where Microsoft first spoke about WhiteSpaces. That was way back in October 2011. The initiative was in partnership with Adaptrum and was meant to supply broadband to Kenyan homes using something called Super-WiFi. The idea was to use the unused spectrum in the TV frequency range to supply broadband to remote Kenyan homes and potentially millions of homes worldwide using something that would be pioneered in Kenya.

On the 5th of February 2013, Microsoft announced that the pilot programme was underway in Nanyuki, RiftValley Province in Kenya. This time, it was being done by Microsoft in conjunction with the Kenyan Ministry of Information and Communications and a Kenyan ISP, Indigo Telecom Ltd. The general idea has not changed. The solution still aims to efficiently deliver low-cost, high-speed, wireless broadband and create new opportunities and to boost the country’s GDP by making it easier to access and understand

These are the key pillars highlighted in Kenya’s economic roadmap; Vision 2030 Document.

This deployment aptly named ‘Mawingu’, Kiswahili for cloud, is the first deployment of its kind in the World. The set up involves the use of solar-powered base stations together with TV white spaces, something partially developed by the Microsoft Research department, to deliver high-speed Internet access to areas currently lacking even basic electricity. People in rural areas have TVs that they use to catch up with current affairs that they would otherwise be unable to catch any wind of.

The Mawingu project is expected to contribute immensely to various sectors of the Kenyan Economy and t support various pillars such as:

Entrepreneurial Growth – Since farming (and agriculture as a whole) currently contributes to about 23.13% of the Kenyan GDP, this technology is aimed at enabling farmers’ access to internet wherever they are just by logging onto a computer. The GoK in 2012 announced the zero-rating of software and products affiliated to ICT. GoK plans to adopt this infrastructure by realizing its dream of switching to digital TV to free up unused frequency spectrum to facilitate this project. One of the base stations for this project is in Kalema, Rift Valley province. It is connected to a Government of Kenya agricultural extension office and will be expressly used for information gathering and research in this facility to support Agriculture, Kenya’s economic backbone. 14 more locations will be added to this network in the coming months.

Supporting Education – 4 of the initial customer locations for the White-Spaces installation are:

These are all institutions indirectly used to improve the educational standards of areas that are far from urban areas of Kenya and by extension a direct input into the Social pillars documented in the Kenya’s Vision 2030 directed specifically towards improving Education and Healthcare and making the two available to all homogeneously.

Computer labs and instruction sets will be provided to each of these schools by Indigo, a local Internet Services Provider. They will employ tools like the recently launched Windows 8 and Microsoft Office 365 (a solution that ensures SMEs and in-need organizations without access to infrastructure can setup with minimum costs) alongside working with community leaders and local companies to identify the needs of the immediate community and the best way to address them. The great anticipation here is that the bulk of interest will be in Agriculture and the Education space.

Last Mile Connectivity is also a huge hurdle to technology adoption in Kenya that whitespaces seeks to tear down. General access to broadband has long been an issue in Kenya. The Kenyan government has recently invested huge sums of money in the undersea fiber optic cable termination at the shores of Mombasa. This has seen a great improvement in conditions under which Kenyans access the internet. However, Kenyans still have a long way to go as far as last mile connectivity is concerned. The usual middle income Mwananchi is still unable to access the internet due to its unaffordable cost. The Kenyan government ought to be grateful to Microsoft though for helping bridge the gap between these who have connectivity and those who don’t to enable access more information from the wealth of information that is the World Wide Web.

Further, Kenyan internet consumers are highly under-using the capabilities of connectivity we currently have. With initiatives like these from Microsoft, we as a country and more importantly an emerging market are being set up to start using up more than 6% bandwidth (which we are currently using) at our international gateway. This will have a domino effect that will drive internet costs down hence accessibility to even more consumers hence the last mile concept.

Microsoft hopes to implement similar pilots in countries based in East and Southern Africa in the remaining months of 2013 mainly to further explore the commercial feasibility of white space technologies. These pilots will be used to encourage other African countries to accelerate legislation that would enable this white spaces technology to deliver on the promise of universal access for the African Continent.