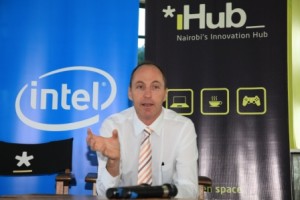 Intel and iHub have entered into a partnership agreement to foster and grow the developer community in Africa through targeted investments in mobile app development and to collaborate with select universities in Africa to enhance developers’ ability to create rich user experiences on Android devices based on Intel technology.

The partnership between Intel and the iHub, a business incubator, in Kenya to foster and grow the developer community in Africa through targeted investments in mobile app development. This will also include online developer resources, university training programs, device seeding programs and expansion of technology hubs. The iHub, headed by Manager Jimmy Gitonga, catalyzes the tech community in Kenya and has evolved into a space with over 10,000 members. The model set by iHub has been used to start more than 30 other tech hubs across Africa, and enjoys a leadership role in the continent due to its size and relationship with the other hubs.  Being a tech space , iHub is able to offer thought leadership in areas of mobile technology and its use.

In Kenya, the company will provide broadly available developer training through iHub and Intel’s Developer Zone, an online developer resource that enables the creation and porting of Android apps.  Intel will also distribute Intel Android devices to the tech hubs, and will collaborate with select universities across the continent to enhance the ability of developers to create rich user experiences on Intel hardware with Android.

GM at Intel East Africa, Danie Steyn, during the partnership announcement said the company’s goal was to enable applications from Africa for the Android market place in 2013, with the primary areas of focus being education, rich media, and gaming.

“Our engagement will not only be around educating the developer community, but we’ll also run a series of hackathons across Africa network in partnership with iHub,” said Steyn. “We’re extremely excited about the growing developer engagement in Africa, and we’re deeply committed to helping the African software ecosystem grow and thrive.”

“The software development scene in Africa is active but still nascent, we’re excited to partner with Intel to grow it”, said Jimmy Gitonga (@afrowave) the current iHub manager. iHub will work with 10 universities in Kenya, and host 30 events targeted at software associations, independent software vendors and in the first year. He also reiterated his excitement at the partnership and the ready adoption Kenyan developers are showing towards adopting smartphones built for this region (Africa) and towards coming up with local solutions to local problems faced by Africans everyday.