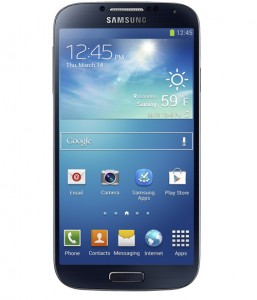 Last year, Samsung stole the show with its flagship Galaxy S3 smartphone. As a result, everyone was eagerly waiting for the launch of its successor to see if Samsung can live up to its high standards. And the company has done just that by unveiling its newest Galaxy S4 flagship handset, which has a far superior package in terms of hardware specs and software than its predecessor. Let us go through the main features of the phone in brief.

Design:- Samsung Galaxy S4 looks a lot like the Galaxy S3 in terms of aesthetics and design. However, it’s larger and stronger than its predecessor. The phone’s body is built from polycarbonate plastic and has a dot-style HyperGlaze finish. It has the dimensions of 136.6 x 69.8 x 7.9 mm which makes it almost as slim as the iPhone 5 and significantly thinner than the Galaxy S3. Samsung has also managed to keep the weight down to 130 grams in spite of adding a larger display and battery.

Display:- The flagship arrives with a 5-inch Super AMOLED capacitive touchscreen display that has a HD resolution of 1080 X 1920 pixels, resulting in a pixel density of 441 ppi. Samsung calls it the adapt display as the phone will automatically adjust the brightness and contrast settings according to the surrounding light conditions, to give you a perfect viewing experience each time. On top of the display, you get a layer of scratch-resistant Corning Gorilla Glass 2 which is more robust than the one used on the S3. It supports multi-touch and can be used with your gloves on so you won’t have any difficulty operating it in winters.

Camera:- The Samsung Galaxy S4 packs in a 13 megapixel autofocus camera with an LED flash on its back and a 2 megapixel camera on its front. Both are capable of full HD 1080 pixel video recording at 30 frames per second. To help the camera distinguish itself from the likes of the Sony Xperia Z and HTC One, the company has added a wide range of features into the camera interface. Users will be able to use both cameras at the same time, capture photos with sound, simultaneously record HD videos and images, erase stuff from pictures and much more directly from the interface. Other features include geo-tagging, touch focus, face detection, HDR mode, Drama shot, smile shot, Cinema shot and much more. The front-facing camera can be used for video calls with up to 3 users at the same time. It also acts as a sensor for the various gesture based features of the phone.

Hardware:- Under the hood, the Samsung Galaxy S4 has an Exynos 5 Octa 5410 chipset featuring a octa-core processor clocked at 1.6 GHZ, PowerVR SGX 544 MP3 graphics and 2 GB of RAM. User memory will vary from 16 to 64 GB depending on the model you purchase. You also get a microSD card which will support cards of up 64 GB. Samsung has also packed in a variety of sensors like accelerometer, gyro, proximity, compass, barometer, temperature and humidity and IR. As for the battery, the phone has an improved 2600 mAH unit which should keep the phone running all day long.

Software:- The phone will arrive on shelves loaded with Android 4.2.2 Jelly Bean and Samsung’s improved TouchWiz user interface. Not only does the new UI have more features but it also has smoother and more attractive transition effects. Some of the new features included in the phone are Smart Stay, Smart Rotate, Smart Scrolling, Adapt Sound, S-Health, S-Voice Drive, S-Translator and much more. There is an Air view mode  which allows you to operate the phone by waving at the screen which might be useful if your hands are dirty or wet.

Pricing and Availability:- Samsung Galaxy S4 will start arriving in markets across the globe from the end of April. Major markets like the UK and USA are likely to get the handset first as the company will roll out its flagship phone in phases. No matter where you are, you’re likely to get your hands on the S4 sooner rather than later as the phone will be available in 155 countries through 327 network operators.