Laptops for Kenyan Class Ones, Compelling Lessons from Ethiopia 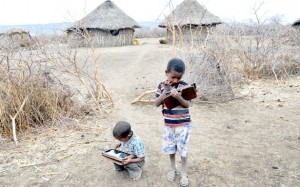 Kenya has a new government that has promised laptops to the kids who are going to class one next year. This is part of the promised deliverables that H.E. President Uhuru’s, in his TNA party, made during presidential campaign rallies and it got so many people talking. After a brief research on the web, I got some good information on ‘laptops’ and unsupervised kids. Read it below:

Sometime early in 2012, some MIT Media Lab students embarked on a journey to a pair of remote, isolated and illiterate villages in Ethiopia. The two villages with about 20 first-grade-aged children each sat about 50 miles from Addis Ababa.

One was called Wonchi, on the rim of a volcanic crater at 11,000 feet; the other is called Wolonchete, in the Great Rift Valley. It was reported that the children there had never previously seen printed materials, road signs, or even packaging that had words on them.

The MIT students who visited brought with them a shipment of boxes with an unknown and unmarked cargo that was taped shut with no instructions on ‘how to use’. They left the boxes there and within approximately 4 minutes of arrival, the boxes were open and the first tablet was already powered on.

What happened next will challenge the role of teachers – 5 days of use later, a group of first grade students has an average of 47 apps per child.

A section article published in the MIT technology review read as follows:

“The kids had completely customized the desktop—so every kids’ tablet looked different. We had installed software to prevent them from doing that,” [Ed] McNierney [of One Laptop Per Child] said. “And the fact they worked around it was clearly the kind of creativity, the kind of inquiry, the kind of discovery that we think is essential to learning.”

After several months, the kids in both villages were still heavily engaged in using and recharging the machines, and had been observed reciting the “alphabet song,” and even spelling words. One boy, exposed to literacy games with animal pictures, opened up a paint program and wrote the word “Lion”.

What this experiment had set out to show was the amazing learning power that kids have. They were able to learn something from a tool they had previously not encountered before. Perhaps what we need is to have a little faith in under-privileged kids. That alongside instilling a ‘there is no barrier to learning” mentality in them; even in the absence of teachers to ‘train’ them how to use the laptops.

The initiative is called the One Laptop Per Child initiative and it aims to secure low-cost laptops for students in remote areas to help them connect with the rest of the world while learning a thing or two. Read about how Evansza Blowski documented it.

Key take away from this is in one of the article’s paragraphs paraphrased to ‘This is neither foreign aid; nor is it a handout to the people of Ethiopia. This is Education, and just the first step in enabling them.

Enabling the young minds of Africa for brighter futures. For a brighter nation, and a brighter continent.