The 2nd Mozilla L10n (Localization) meet up was held on 7th July at Naked Pizza in Parklands, Nairobi with a total of just under 10 attendees. The focus was on having more reviewers in the Swahili locale to expedite the translation process with the hope that a Firefox Swahili can be shipped sooner than later. The Mozilla Kenya chaps (and ladies) also learnt about profiling which allows users to run more than one installation of Firefox – a handy technique when testing the Aurora version of the Firefox in Swahili.

All in all, one of the key learning was that the Swahili version of Firefox ought to have more users and downloads so that it can move to the next cycles i.e. beta and shipping versions of Firefox. To get more users, we would need the links to the Swahili Aurora download be inserted on our website and social media channels. Similarly, the L10ners decided that it would be best to leave the Keyboard keys as they are in English since there is no Swahili Key board and a strict need to ensure the translations adhered to grammar rules. 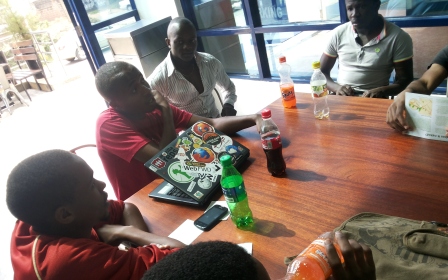 Some words they tried to translate were found to be longer than usual shall be enumerated on the etherpad used to not down difficult words for further discussion.

One of the members, Arky, introduced a Craft Silicon Foundation NGO which runs several programs that can be leveraged on to further the localization mission. They use a bus fitted with computers which are powered by solar panels – a web maker event would be great for such an audience. More updates to follow..