Lost And Found With Nokia HERE Drive And Maps

A few weeks ago, a bunch of guys and I decided to take a trip to the little town of Naivasha about 95 Kilometers from Nairobi. We chose a warm Saturday morning for this expedition with the sole mission of finding out how well Nokia’s HERE Maps work taking with us a fully charged Lumia 720 hooked up to the bus radio and an excited crowd of young people looking for adventure. King’ori, our go-to-guy at Nokia, activated Nokia HERE maps to give us directions all the way to our destination. Just as we were leaving, I was impressed to see that HERE maps in Nairobi has 3D capability -what this means is that the ‘mappers’ who marked up the map have 3D imagery of landmarks in Nairobi like The Stanley Hotel and these show up on the map ensuring you cannot get lost even as you walk, drive, cycle… (or even crawl on those nights out when you’ve had more than the usual serving of tequila). On the way, the phone kept telling us when to turn right or left to keep us on the right path. What’s interesting is that the map on the Lumia 720 will detect tunnels and underpasses like the Pangani under-pass and Museum Hill Interchange passes and light up the screen so that you don’t have to stare at a dark screen if you’re looking at the map on the phone’s screen.

Just to test the proper working of this service we decided to get ‘lost’. Now, lost is in brackets because everyone knew the way to Naivasha but we made a few wrong turns to see how effective the map is at getting you to your desired and pre-set destination.

Almost halfway there, the driver was instructed to take a wrong turn. HERE maps then detected that we had missed a turn and started to calculate the shortest way to get back to the proper route in the background.

Just for illustrations, allow me to explain.

Say you’re moving straight and straight ahead (say North) is the correct path but you make a left turn (West), HERE maps and HERE Drive will work together to check how far West you have gone and then calculate the shortest route using a Right, and then Second Right, and then Left move to bring you back to the shortest line/route to your destination using already existing roads. This explains why as many as 4 in every 5 car manufacturers use Nokia HERE maps for navigation and routing patterns as evident at the Nokia #SeeMoreLumia event at the Forum in Johannesburg, SA. 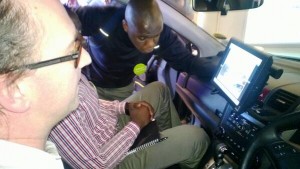 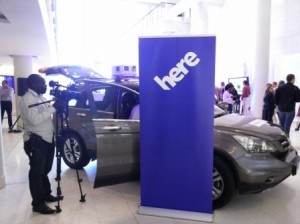 Long story short, we got to Naivasha safe and sound.

What I did not expect however was to get lost alongside another group of people (Mbuvi, Mwirigi, Brownskin, Rodgers, and Wamathai). Somewhere in between Mr. Price and Fourways, we decided to take a little tour of an unfamiliar area.. and we got lost. Having navigated for a while using the sun and its shadow, something Mbuvi suggested, the entire group ended up more lost than before. Then I remembered, “Oh! I have HERE Maps!”. See the other good thing about these maps on Nokia is that you can decided to keep them offline. Roaming would have cost a fortune on my Airtel line in Jo’Burg but since we had the map, we got back to the proper road (which I have to add was a long way off what we thought).

Here’s a smart tip, if you’re travelling to a different country, download that country’s map. It will save you a lot in time and soles off your expensive brogues; and ensure you look cool because you know the way at the same time.