On Friday 29th November we had a visit from Samsung and Zalego Limited at the Buni space. The main purpose of the visit was to expose the community members with the opportunities that are coming up with the Samsung apps store to the Tanzanian mobile applications developers. The theme of the event was to encourage the local developers to put their applications on the apps stores instead of just developing the apps and keep them on their personal devices. 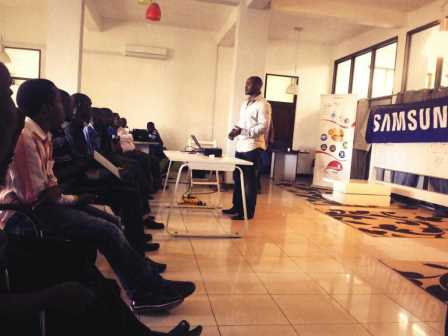 The meet up started with Mr. Eric from Zalego limited sharing his experience with the junior mobile developers of the space. He talked a lot on the business angle of the mobile application development industry. He gave the thrilling story of Zalego, where they come from and the challenges that they have been facing like any other African mobile applications developers. He talked about the market in Kenya and the Tanzanian market, he urged Tanzanian mobile developers to be more aggressive and persuasive towards opportunities since the Tanzania mobile application market is not yet that much saturated.

Mr. George from Samsung Kenya, he talked about the mobile technology ecosystem, the players that are involved and the government support. He explained although Kenya seems to be receiving a lot of support from the government but still Kenyans work too hard to search for opportunities. He shared the experience about working with the local mobile service providers and the fact that even in Kenya the mobile payments API has not yet been released to the public but still people come up with solutions that do not involve the use of the API.

He urged developers to try to solve problems and to always start with the minimum viable products (MVPs) and try to develop the product together with the customers since this will enhance the product and help them to meet the user’s requirements. He advised the local developers to release free version of the products to the app store to check and learn user’s response towards the product. 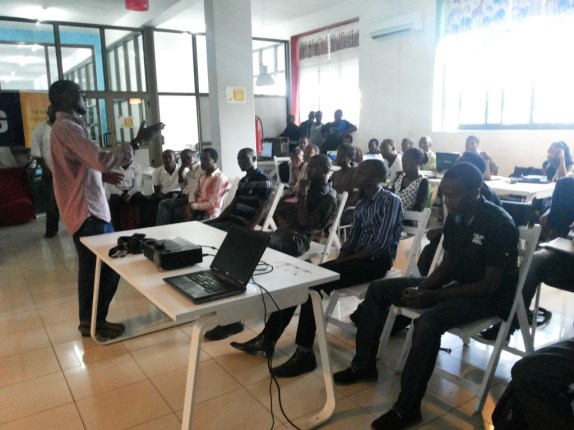 Mr. Dickson also from Zalego, who used to conduct android training for local developers also shared his experience dealing with the local developers. He urged them to be so much attached to the tech hubs and to seek information always. He gave an example most of the mobile developers in Dar es Salaam they don’t know if Zalego has a mobile developer community to help and assist junior mobile developers since they are not seeking information or even attend useful event at the local hubs.
We had a brainstorming session and the audience was very interactive people asked a lot of questions about Google Play Store, Samsung Apps store and online payments systems. They wanted to know the procedures if they are to be uploading their apps online for purpose of selling them. Mr. Bariki Elilaki one of experienced local mobile developers shared his experience on this. He gave detailed explanation on how you can collect your money via Western Union or using your local bank swift code although he agreed sometimes it kind complicated to do that.

In the end, we had one on one interviews with our guests and plan for future event of such kind. We also planned on how we can help the students who have attended the android boot camps at Buni and Kinu to be more productive and implement the skills they have learnt on the training to solve real time problems facing the community. It was such a nice event for learning and interacting.

This is a re-post from the TanzICT blog. It has been written by Jumanne Rajabu, the Trainee Manager: Trainer on Innovation and Technology Entrepreneurship at Buni Space.