So Arsenal FC was the most discussed Premier League Club on Twitter in the transfers month of January, 2015, with Manchester United following at number two and Chelsea FC scooping the third position ahead of Liverpool and Man City, who positioned 4th and 5th respectively.

The trend only confirms the fact that the three top discussed clubs continue to remain the most popular soccer clubs across the globe(at least on Twitter), with fans always looking to express their predictions, support and defend their respective clubs as well as the players.

Talking of players, the month under review saw Twitter go crazy with discussions on player transfers, some only rumoured before end of January transfer window, while others confirmed signings.

Some of the players rumoured for moves to other clubs included Barcelona’s Lionel Messi, Man United’s David De Gea, Mats Hummels and Gareth Bale who were rumoured for Man United and Juventus’ Paul Pogba, among others.

Below is a graphic representation of Twitter discussions on players who were rumoured for transfers to other clubs and who, in a rare twist, did not get confirmation, not even one. 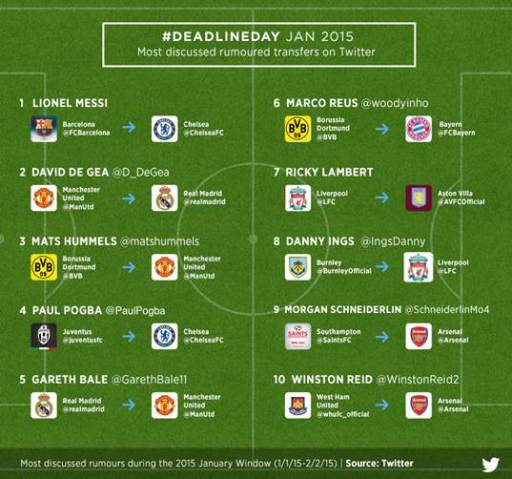 Romours out of the way and off to the actual transfers. If you are a diehard fan of soccer you don’t need to be told which players got transfers, but I will not tire to remind you or educate those who pretend to know but don’t really know.

Under the hashtag #DeadlineDay, tweets and tweets on the transfers lined up seconds after seconds, information on confirmed player transfers as well as feelings on each one of them flooded the twitter pages.

Now Chelsea’s winger, Juan Cuadrado dominated the deadline-day discussions as he signed on the biggest deal – a 23.3 Million Euros agreement move to Chelsea. He managed to top the list as well as grow in follower numbers to reach 100K followers, following his January move.

The tweet on Chelsea’s announcement of Cuadrado was the most retweeted, garnering over 26K retweets. Andre Schurrle and Aaron Lennon were the two other players that were most talked about players on #DeadlineDay after Cuadrado.

To view the top 10 most discussed player transfers, below is a representation putting Cuadrado at the top, followed by now Real Madrid’s Martin Odegaard, Victor Valdes who is now part of Man U, Steven Gerrard’s move from Liverpool and Lucas Silva now of Real, among others. 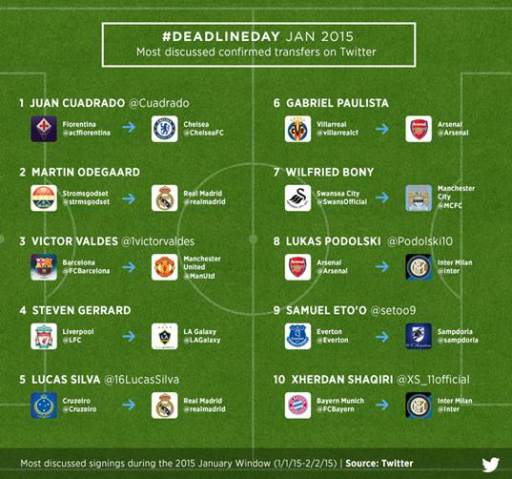 This is the 2015 January transfer window as it happened on Twitter, driving the most conversation on the microblogging platform. Previous windows have experienced the same kind of trend, with the immediate last one being dominated by Angel Di Maria, Mario Balotelli and Luis Suarez.