StarTimes Cuts Prices For Its Free To Air Decoders

StarTimes Media, one of the Pay TV companies not allowed to air content from the three media houses (the analogue three) has moved in attempt to lead in the digital television market share by cutting prices for its free-to-air set top boxes.

Following the reduction,Kenyans wanting to purchase a StarTimes free-to-air decoder that requires no subscription after purchase to watch the available TV channels, will be required to part with KSh 3,299, from the earlier KSh 3,999.

This brings StarTimes in direct competition with Radio Africa’s Bamba TV, also a free-to-air set top box that claims to offer over 50 channels and retails at the exact same price of 3,299. StarTimes says that through the offing, Kenyans will be able to enjoy over 75 international channels for one month.

After the set one month, Kenyans will then continue to have access to over 55 channels at no cost, and in the case they will want more channels, they will have the option to subscribe to more channels through the Pay TV service from the same set top box.

This, according to StarTimes will allow more Kenyans to gain access to the free digital television service, following that the country has already carried out the analog switch-offs for both the first and second phases and plans to complete the third phase in March.

“The new price is testament enough that as a brand, we are committed to see more Kenyan household’s access affordable set top boxes and premium digital television service,” says Mark Lisboa, VP for Marketing at StarTimes.

“Our free to air set top box is equally superior in that it saves the consumer the cost of acquiring a pay television set top box in the event they want to upgrade and access international channels as they can use the same set top box”.

This development comes at a time when the country is facing a lock-down with some of the media houses who have opted to move to the online platforms to broadcast their content after there was a disagreement between the houses and the government. The media houses have had their TV stations off air since February 14, this year.

As both sides continue to cast blame on each other and Kenyans continue to use social media to make the whole digital migration saga a mockery and humour ground, word from all sides is that Kenyans have become victims who have been denied their right in accessing content as the available digital television services are expensive – that of course not true.

I may not know who the victim is as of now but even the expected set-top-boxes from the three media will require Kenyans to make a purchase, on-off-fee of course, but all in all money will be parted with. So it is up to Kenyans to decide on the services depending on how light or heavy their pockets and hearts sway. 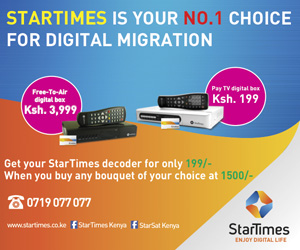 Kenyans purchasing digital decoders from StarTimes should be keen to ask for their warranty documents as the set top boxes come with a One-Year warranty.