WhatsApp Starts Roll Out Of Its Voice Call Service

Last year the instant mobile messaging application WhatsApp, that is now also available via the web, announced that it would be introducing a new voice call support feature for its users in 2015 that would help customers make calls directly from the messaging platform.

However, new wind swaying our way has seemingly shown that the messaging service has already began rolling out the voice service offing to some of its users as some people have reported being able to activate the feature on the latest update.

One user, who posted screenshots of the much awaited feature in use, said he was able to activate it and used it to make a phone call. The feature has been rumoured for a while now and has been anticipated for, but now it seems it is slowly becoming a reality.

Below is a screenshot of the activated voice call feature. 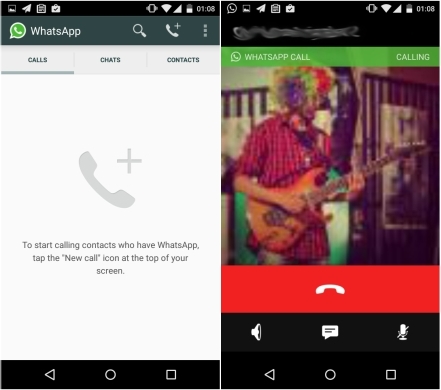 In subsequent reports, other users also expressed having been able to activate the feature on their phones, though WhatsApp has not yet made an official announcement that the feature is already available, purporting that the service could still be going through trials – yet to be confirmed.

Earlier in February last year, WhatsApp had announced it would roll out the voice call service to users in the second quarter of 2014 but the said time passed on quietly without a word on the roll out. Following the buy-out completion by Facebook, WhatsApp then announced that users would be able to make calls from the platform in Q1 of 2015.

Now it seems WhatsApp users around the world are close to begin enjoying the long-awaited service that seeks to compete with the likes of Skype and Viber, if the reports are anything to go by, with recent activations of the call feature being reported in India.

According to the screenshots posted, the new interface will have individual calls (to show recent calls), chats and contacts tabs at the top. The call interface shows the name and WhatsApp image of the person the user is calling.

Through a new web offing introduced last month, users around the world are now able to access the WhatsApp messaging platform from their desktops and laptops, making the WhatsApp experience even better.