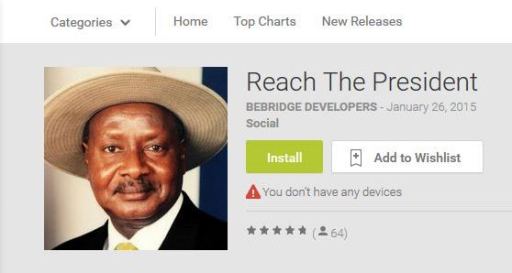 Ugandans can now connect with the president without struggling to find the right Twitter handle or Facebook profile or any other social media site dedicated to their president, following a new mobile application that is designed to help citizens of the neighbouring country share their views and complaints directly to President Museveni.

Dubbed Reach The President and developed about one month back by two Ugandan students, the App has been designed to aid interactions with the head of state in matters pertaining corruption, security, infrastructure as well as any other development ideas or mishaps that needs to be addressed for the growth of the country.

With every citizen always feeling the need to complain about something not being done or voicing their opinions on how current issues are being addressed, there has always been people trying to reach the president directly because most people believe due process has a way of always getting delayed or disposed altogether, especially when there is vested interest.

In Kenya, we have seen citizens try to reach the head of state through phone calls or text messages, and luckily for some the direct conveyance of information has worked in their favour. This however, is not a sustainable way of communicating complaints or addressing opinions and views, especially with the over 40 million Kenyans and that is why a web portal was introduced by the Kenyan government.

The web portal, which is the official website of the president is designed to communicate issues as they happen to Kenyans as well as provide a platform for engagement where Kenyans can report corruption issues and follow up on events. Last time I tried to navigate through the portal, I could hardly move from point A to Point B, now however, the portal is very much operational.

So now, Uganda has introduced an Android application to enable more streamlined interaction with their president that will be available as a free download on the Google Play Store, after which users can install and start playing around with it.

It does sound like a fun application but only in time will we know for sure if it was helpful in any way, especially with Uganda’s general elections being around the corner and with people touting the application as one of the political gimmicks ; something one of the developers denies as being true.