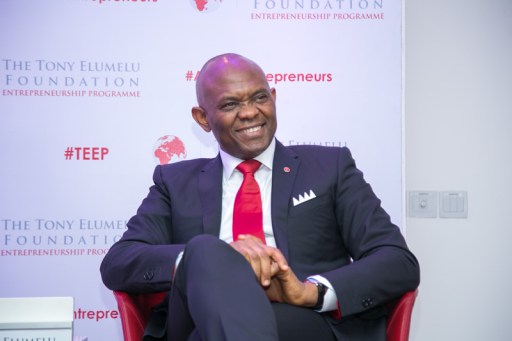 Tony Elumelu at the Entrepreneurship Programme Launch in December 2014

From the large pool of entrepreneurs in Africa who applied to be part of the Tony Elumelu Entrepreneurship Program (TEEP) that opened for applications on January 1st this year and closed earlier this month, 1,000 entrepreneurs have been selected to become part of the annual training and mentorship program.

The program, which is now in its first year, is a 100-Million-Dollars initiative that aims to discover and support 1,000 African entrepreneurs over the next 10 years and create one million new jobs as well as generate 10 Billion Dollars in additional revenue along the way.

And like Kenya has been home to innovations left, right and centre, it did not disappoint in winning at the selection process as it became the second country with highest number of selected ideas after Nigeria.(Not to insinuate anything, but the foundation is housed in Lagos, Nigeria). Uganda follows in third position as South Africa and Ghana complete the top five countries in terms of numbers.

Now representing the creativity and potential of people in Africa, the selected 1,000 will constitute the first class of 2015 and will start TEEP’s journey towards transforming the African continent by bringing together innovative ideas and scaling them into large business ventures to help grow the economy.

“The selection of these 1000 entrepreneurs brings us closer to our ultimate goal – to drive economic and social transformation from within and to radically intensify job creation in Africa,” says Tony Elumelu in a statement. “Though I have never met or spoken to any of the winners, I am confident that due to the rigorous criteria and selection process, these entrepreneurs are Africa’s hope for the future.”

Selected entrepreneurs will be taken through a 9-month cycle that will include an intensive online training curriculum, mentoring and participation in a two-day entrepreneurship boot camp as well as the Elumelu Entrepreneurship forum.

And in the spirit of not abandoning those not selected, invitations will be extended to the over 19,000 who missed the cut, to join the Elumelu Entrepreneurship Network where they can further their entrepreneurial skills.

“The high quantity and quality of applicants we have received is testament to the brilliant ideas and incredible talent that exists in abundance across Africa,” said Parminder Virr OBE, the director of Entrepreneurship at the foundation.

Participants are set to receive grants of $5,000 (about Ksh 459,000) each at the end of the 9 months training to help in growing their businesses, with anyone wanting additional funds to submit their applications for another 5,000 dollars as loan or in return for equity.