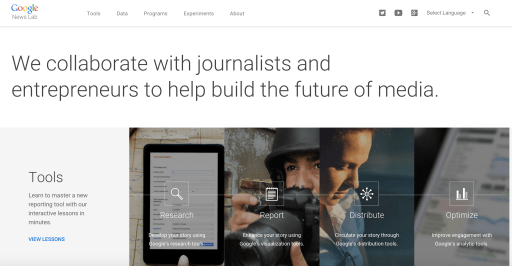 It’s hard to think of a more important source of information in the world than quality journalism. At its best, news communicates truth to power, keeps societies free and open, and leads to more informed decision-making by people and leaders. In the past decade, better technology and an open Internet have led to a revolution in how news is created, distributed, and consumed.

Google’s mission is to organize the world’s information and make it universally accessible and useful. The creation of  the News Lab is to support the creation and distribution of the information that keeps us all informed about what’s happening in our world today—quality journalism.

The move to better showcase Google’s tools and resources for reporters comes at a time when a number of social media services are often found to be the place where news first breaks. These social media posts then become embedded in reporter’s stories, including Facebook updates, tweets, and now, live streams from services like Twitter’s Periscope or Meerkat.

Google has created many technologies and platforms that have engaged the media industry. As both the media landscape and technology continue to evolve, Google believes they can create a more informed world if technologists and journalists work together.

This move by Google put the company at a greater advantage as it aims to be the leading news provider, it was only a matter of time for this to happen as News Lab  builds on a series of announcements that came out last week which were similarly focused on Google’s increasing efforts to play a more important  role in the world of journalism. News Lab as of Today is being run by a 10 member team of both media experts and professional journalists.