Why would cyber-criminals want to control your Facebook account? At the very least, they could “like” weird things and promote questionable goods and services on your behalf. However, Facebook is well aware of this common criminal scheme and collaborates with Kaspersky Lab to protect innocent users from account infection.

To protect its users from cyber crime, Facebook recommends a free anti-malware scan to owners of accounts that Facebook’s team has detected as behaving suspiciously and appear to be infected. Of course, Facebook itself is never the source of malicious software. But one can get infected in many ways. For instance, Facebook is a major target for phishers: 1 in 5 phishing scams target Facebook notifications. For this reason, one should be vigilant when receiving emails from this network–they might be fake. Additionally, there are lots of Trojans targeting Facebook users as well.

If the Facebook team has detected suspicious behavior from your account and it looks as though it might be infected, the social network will suggest you scan your device for security issues. Upon logging in, you will see a warning page like this, offering the security scan. 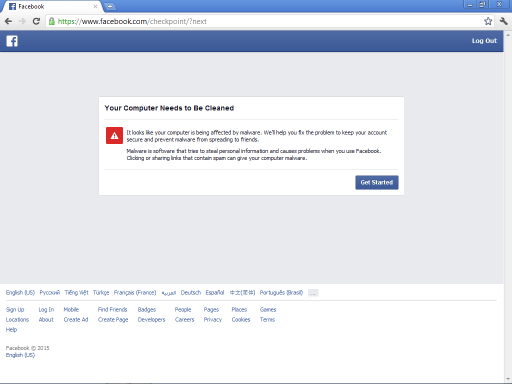 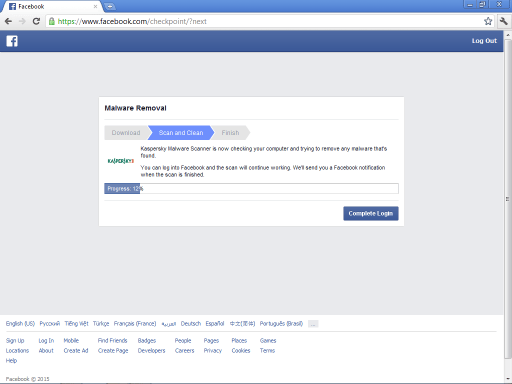 “Thanks to the collaboration with these companies, in the past three months we have helped clean up more than two million people’s computers that we detected were infected with malware when they connected to Facebook,” said Trevor Pottinger, a Facebook security engineer.

Kaspersky Lab  is an international software security group operating in almost 200 countries and territories worldwide. The company is headquartered in Moscow, Russia, with its holding company registered in the United Kingdom.