You Can Now Access Microsoft Office For Android phone 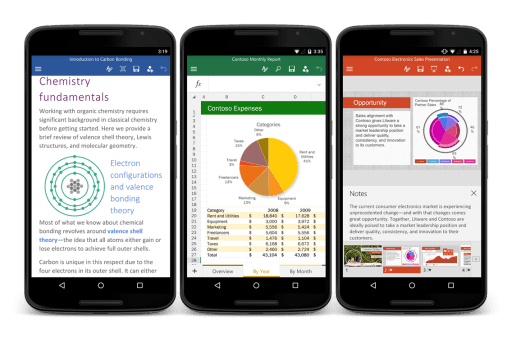 Office for Android phone is here

In an announcement on the Microsoft Office blog,  Kirk Koenigsbauer, corporate vice president for the Office Client Applications and Services team said, “Today I’m pleased to announce the general availability of the new Word, Excel and PowerPoint apps for Android phone. These join our previously released Office apps for Android tablets to complete the Office experience for the millions of Android users around the world. DownloadWord, Excel and PowerPoint on your Android phone today to get started”

Five weeks ago, microsoft announced  the Office for Android phone preview. before the official launch, the app  was tested  on over 1,900 different Android phone models in 83 countries. During the preview, feedback  from thousands of these users was collected, and over the last few weeks the developers  were able to incorporate a lot of the feedback into the apps  launched today.

Here are a few   aspects of the new Android phone apps: