StarTimes Has A Great Offer From Now Until September 2015 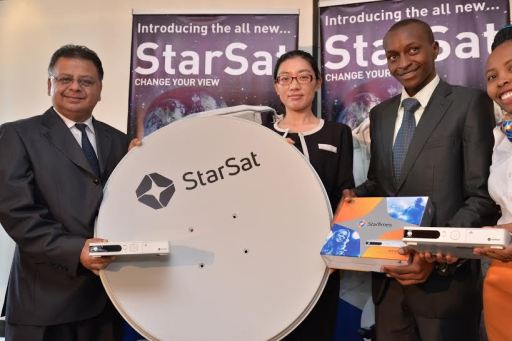 StarTimes Media is just full of surprises in 2015.

They have again stepped up its efforts to grow the number of households accessing digital television in Kenya through a major campaign that will see the company’s Pay Television set top boxes retail at 44% less from 20th July to 30th September 2015.

Kenyans will be able to access the set top boxes for just KES 949 down from KES 1,699. The breakdown is as follows: KES 199 for the decoder and KES 750 as subscription fee which will enable subscribers to have a choice of either enjoying 5 months of Nyota bouquet, one and a half months Basic bouquet, 3 weeks of Classic bouquet or 2 weeks Unique bouquet.

The company has equally extended a discount on the recommended StarTimes external antenna and 10 metre cable which will now retail at just KES 1,000 down from KES 1,200 this being an effort to improve signal reception while enjoying the StarTimes digital television service for the households across Kenya.

While acknowledging these latest developments, StarTimes Vice President Mr. Mark Lisboa noted that the company has made major content acquisitions in the past few months which advised the move to lower the cost of acquiring the set top boxes to enable more Kenyans not only access the digital television service but also enjoy the premium and exclusive content now available on StarTimes.

“Our move to lower the set top box acquisition price is advised by the need to make it more affordable to access StarTimes digital television service where Kenyans will be able to enjoy our premium and exclusive content acquisitions including major German soccer league the BUNDESLIGA which kicks off in mid-August as well as World Rally championships with the Finland rally expected to kick off on 2nd of August,” says Mr. Lisboa.

The German Bundesliga is arguably the fastest growing league in terms of popularity in the world which the company will be broadcasting exclusively for the next five seasons (2015-2020). StarTimes subscribers will get to enjoy the high adrenaline soccer action from the 18 teams, including the German Super Cup offering 9 LIVE matches per week.

The matches will be broadcasted on all StarTimes sports channels, including Sports Premium, Sports 2 and Sports Focus with the next season expected to start on 1st of August with the Supercup between Bundesliga champions FC Bayern München and DFB Cup winners VfL Wolfsburg.

“We are confident that StarTimes is set to become the pay television service provider of choice with our terrestrial service becoming more affordable while equally broadcasting premium content, more Kenyans will embrace our brand joining hundreds of thousands of others who are already enjoying our service across the country,” concluded Mr. Lisboa.