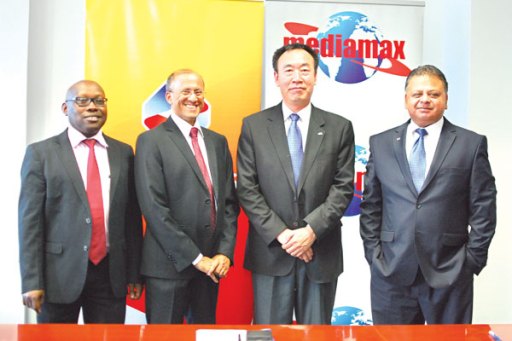 Lovers of the Italian football league, Serie A, definitely have something to smile about this year.

StarTimes has extended the exclusive right for the matches by FTA (Free-To-Air) transmission which will see K24 broadcast 38 LIVE Serie A matches on weekends and midweek occasionally, as well as 38 ‘Serie A’ previews and supporting shows for the 2015/16 season.

Speaking during the signing ceremony, Mediamax CEO Mr. Ian Fernandes spoke highly of the partnership between the 2 companies noting that it will enable majority of Kenyans access the premium European soccer content that previously was out of reach largely due to the high subscription costs but the same will now be available for free on K24.

“Indeed this is a positive step not just in providing entertainment content for our viewers but also in growing access to programming that provide exposure and that can possibly contribute to the development of our homegrown talents through the public viewership of the best practices that is the Italian Serie A,” noted Mr. Fernandes.

StarTimes Media has acquired exclusive broadcast rights for The Italian Serie A for the next three seasons (starting 2015 until 2018) with the league being among the most watched in the world and often depicted as the most tactical national league.

StarTimes Vice President Mark Lisboa also pitched in to note that the partnership with Mediamax Network Limited will enable majority of households enjoy the premium content in digital quality. He also reiterated that StarTimes digital television signal now covers over 70% of the Kenyan population with the recent launch of the Machakos, Naivasha, Embu and Kapenguria signals late last year as we reported right here on Juuchini.

“With K24 broadcasting the Serie A, we are sure over 70% of Kenyans have access to this premium sport having recently added to our reach with the roll out of our Machakos, Naivasha, Embu and Kapenguria digital television signals. It is in the same spirit of growing access to sports content that we are currently rewarding subscribers with free sports bouquets for each subscription renewal made,” noted Mr. Lisboa.
“We are delighted to be the free to air partner of choice for StarTimes to air the Italian Serie A as we believe it is a win-win cooperation, that will enable us entertain the Kenyan football enthusiasts,” concluded Mr. Fernandes.