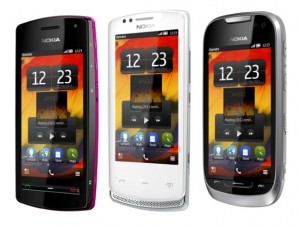 Nokia today announced a new series of smart phones for the Bangalore market.

These new phones run their new Operating System, Symbian Belle, and are expected to have various key capabilities.

Among these include NFC (Near Field Communication) and this is a really new and exciting product. The reality is that every new mobile phone is coming out with NFC, to enable more than just sharing contacts. The next level is social payments and Nokia realized that and want to capitalize.

A Bangalore App developer firm, Divum, used this opportunity to showcase the power of these Symbian Belle devices and they used it to manouvre an All Terrain Vehicle (ATV) using an app they designed and deployed on these devices. This application uses Wi-Fi and not NFC though. 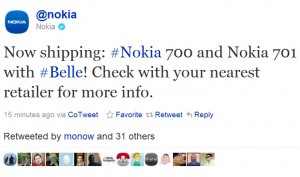 The Nokia 700 features a 1 GHz processor, a 3.2 inch clear black amoled display with Gorilla glass. This device is made entirely out of recycled plastic. This comes in as Nokia’s thinnest phone.

The Nokia 701 is another one. It has a 3.5inch screen, clear black amoled screen with Gorilla glass as well. Although it looks like a refurbished C7-00, the701’s new graphics processor supposedly has 4X the graphics memory in comparison to older Symbian handsets.

These are the latest in the range, and they should be retailing locally (.KE) soon.