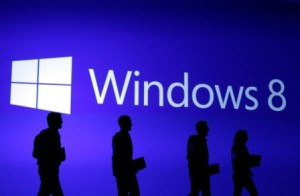 Quite a number of industry analysts pitted Windows 8 to be a failure. Mainly because of their consumer approach that is a change in how Microsoft does business but more because it is fluid and fast and came as a re-imagined product many didn’t think Microsoft could pull off.

Long story short, Windows 8 has a new Outlook towards life. See what I did there? Outlook. Microsoft. *Argh* Never mind.

Some industry analysts said going the consumer centric Apple way was not the best thing to do. Windows 7 was a huge success for Microsoft managing over 700 Million copies worldwide. It is definitely going to be hard to top this number from a technology perspective but then again this is Microsoft. They understand technology. Oh! There’s that and then there’s this: I’m glad to be one of the first to tell you that you were wrong about Microsoft tanking with Windows 8. Windows 8 is doing well. Extremely well.

On its initial day of release, Microsoft managed a good number of downloads and pre-hype. From a sales-versus-time perspective, Windows 8 is already selling better than Windows 7. Of course we don’t expect the Corp. to come out and say that 8 is going to sell much better than 7 but for projections so far, 8 is expected to do much better than 7. Windows 7 was launched at the beginning of Q4 2009 and by sometime beginning of Q1 2010; it had sold more than 62 million licenses. In fact, sales were so good that Windows 7 was at the time the best selling operating system in history. Windows 7 is “the 50 Shades of Gray” of Operating Systems. It has sold like single malt whiskey in Antarctica during winter season. The uptake was nothing short of fabulous.

What this means is that 62 million copies got sold in about 3 months. When you do your math, this comes to 2.067 million copies a month on average and 688,889 licenses every day. This is all on average of course.

Now turn your attention to Windows 8 which was launched on October 26th and 15th November 2012 in Nairobi. A month into Windows 8 and according to reports, Microsoft has managed 40 Million licenses so far. On a per diem sales average, that comes to 1.33 million licenses per day. Amazing huh!? I will go out on a limb here and say Windows 8 has sold twice as much as Windows 7 on a per-day average without weighting it on anything. Bear in mind that it is still November hence it is not yet holiday season.

This ratio should significantly change to more like 2:5 or even 2:6 in the coming months if all goes well for Microsoft.

You can get you Windows 8 copy online at www.windowsupgradeoffer.com